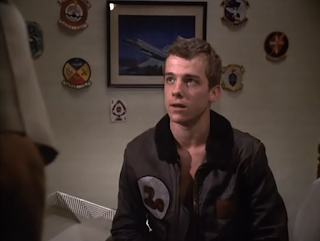 So, yes, I understand that you don’t want to hear from me and just want me to leave you alone, but I still consider you an old friend. And, thus, if I feel like writing something from now on it goes directly to you.
:O)
Y’know, Laurie’s dad flew fighter missions out of Guam during the Vietnam War. He was a navigator. When he got home in the early-mid '70s he later became a cop in Michigan before the family moved to Sumter, South Carolina, where Laurie lived before she went to Bowdoin.

He passed a few years ago, but he was a tough old bird. The first time that I met him he made a point of showing me his weaponry. He was an old cop and protective of his young daughter. So, he brought out this box and said, “I just want to show you some of my stuff.” He pointed out his billy-club, a few of his guns, handcuffs. You get the idea.

The point was clear. He was telling me that if I hurt his daughter, he would hurt me. Laurie and I were both grad students in the SFSU Department of History, but I took the man seriously.

There is definitely both love and anger in that family, although aside from that interesting moment they have has always been gracious and loving toward me… perhaps more so than I deserve.

Anyway, the other day I watched “The Great Santini” with Robert Duvall and, I have to say, I like that movie a lot. There is a complexity to Santini and his relationships with his wife and kids that I find poignant, particularly his relationship with his daughter.

But Laurie hates that movie with a passion because the main character reminds her of her dad. It just cuts too close to the bone. Nonetheless, I ordered the book by Pat Conroy because I love that film. When I started talking to her about it, she got upset because “Bull” Meechum was abusive.

I tried to explain to Laurie that while, yes, Meechum was a bully and sometimes was too rough with his family – who he basically treated like soldiers under his command – he also had positive qualities, like bravery, loyalty to family and country, and wit.

Laurie is having none of it.

As far as she is concerned that character was pure evil and she asked me to not even discuss it with her, because it’s painful to her, so I acquiesced to that request, because I love her very much.

Nonetheless, we have a small gargoyle reading a book that sits out front of the house. We named him “Gary” in honor of Laurie’s dad who was buried with full military honors at Baltimore National Cemetery a few years ago.

I just thought that you needed to know that.

In the 1950s and 1960s, when conservatives held some power in American politics, they were widely mocked by the growing counterculture and the Beats and Kerouac and Ginsberg and Kesey -- and all that jazz -- led to the rise of The Movement.

It was the 1960s. It was anti-war. It was second wave feminism. It was the rise of the New Left and people like Abbie Hoffman and Jerry Rubin and Bobby Seale of the Black Panther Party. It was also the rise of environmentalism and the movement to protect the planet, not to mention space exploration and people like recently passed Apollo 11 astronaut, Michael Collins.

These were people, whatever their political affiliation, who refused to be close-minded.

The Republican Party of the 1950s, with perhaps the exception of people like William F. Buckley, was rigid and close-minded and represented just the kind of people that liberals are pushing back against today.

The contemporary-left in the US today is just as close-minded and rigid and boring and authoritarian as were many Republican in the 1950s.

We will stand up against them today, just as we did yesterday.

The shifting meaning of words is key to understanding political sensibilities.

In this piece, written for
Karen Lehrman Bloch
's White Rose Magazine, Jason Paluch outlines the essential differences between "Liberalism" and "Leftism."
This is something that has stuck in my craw for years.
Liberalism is about the political tradition, grounded in the European Enlightenment, that values the freedom of the individual and that probably reached its height with Martin Luther King, Jr. and the Civil Rights Movement of the 1950s and 1960s.
Paluch concludes:
"Liberals adhere to the idea that people have a right to freely live their lives in any way they see fit as long as their choices and actions do not prevent others from doing the same. Leftists believe they have a right to dictate to others how they must live and what they should believe. The difference could not be more clear." 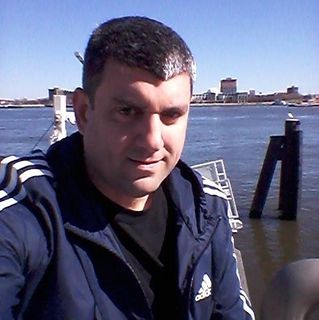 Another One Bites The Dust. 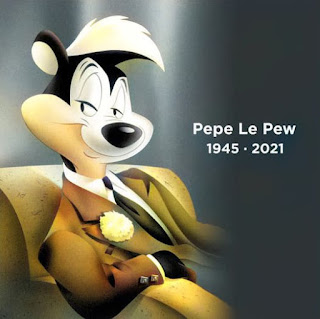 The Road To Hell

I know I'm going to Hell. Found myself dreaming I was playing with Mr Potato Head while reading Dr Seuss and drinking Coca Cola. The good part is, there is no polar vortex in Hell, so..... 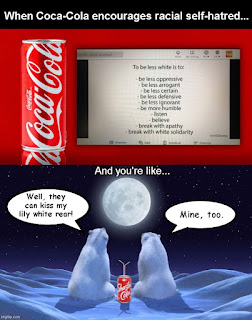 The Muzzle-Mask, whatever its medical utility, is a symbol of submission 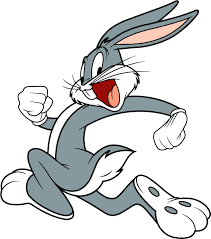 It is the most outward sign of the Covid Regime.

It represents a submissive willingness to go along with the Lockdowns and all that entails.

It means being OK with governmentally-created increases in homicide, suicide, poverty, homelessness, the death of small businesses and restaurants, old people dying alone, divorce, domestic violence, alcoholism, drug-abuse, looting, and rioting in the streets in the name of "social justice."

The muzzle-mask is not merely an inconvenience.

It is a symbol of submission.

My intention is to ditch my mask shortly.

It's been a whole year, for chrissake, and that is enough.

I will put on a muzzle if I must go into a store that requires one, but that is it.

On the street, I will not wear one.

I will maintain social distancing from people, you can be sure, but if you live in fear then you should stay the hell away from me.

Email ThisBlogThis!Share to TwitterShare to FacebookShare to Pinterest
Older Posts Home
Subscribe to: Posts (Atom)
The Non-Peace Process
ARTICLES PUBLISHED ELSEWHERE:
The Elder of Ziyon
Jews Down Under
The Jewish Press
American Thinker
Times of Israel
The Algemeiner
Campus Watch