Irony: a state of affairs or an event that seems deliberately contrary to what one expects and is often amusing as a result.

United Nations Secretary-General António Guterres on Tuesday called on Lebanon’s government to disarm Hezbollah, saying it posed a threat to the UN peacekeeping mission stationed on the Israel-Lebanon border.


First, might I say, a little late don't you think UN? UN Security Council Resolution 1701 happened in 2006. Hezbollah has been breaking it since almost the beginning, building its military strength, gaining actual seats in the Lebanese government and since 2016,


"Hezbollah has had de facto veto power on political decisions despite being a minority stakeholder in the political process. The once-formidable authority of the position of the Lebanese Sunni prime minister does not exist now without Hezbollah’s consent, and the current Christian president, Michel Aoun, is an ally of Hezbollah." 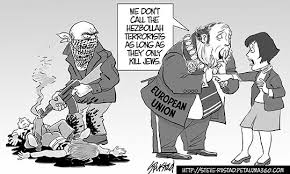 Ten Reasons Why the Progressive-Left may Reelect Donald Trump

10) And last but not least, this never-ending constant hostility for the guy coming out of the progressive-left and the Democratic Party. What his enemies do not seem to realize is that their toxic hatred reflects far worse on them than it does on Trump.
Posted by Mike L. at 3:47 AM 41 comments:

"So, it's now antisemitic to demand that Israel treat the Palestinians humane?"

Michael Lumish
Despite 2,000 years of diaspora and the scattering of the Jews via European imperialism in the Middle East and the various pogroms and persecutions all leading to that romping good time that we call The Holocaust, the progressive-left still thinks that the Jews are the aggressors.
As a real-world acquaintance of German extraction once said to me, and I paraphrase, "So, it's now antisemitic to demand that Israel treat the Palestinians humane?"
The Arabs have been stomping on the Jews since the time of Muhammad and this individual honestly believes that the Jews are not "humane."
Let that sink in for a moment.
This is a progressive-left "anti-racist" of German ancestry who believes that the Jews of the Middle East are not "humane" and the Arabs are like tiny children in need of a chocolate chip cookie and a pat on the head.
Why does that sound just so familiar?
Posted by Mike L. at 6:02 AM 18 comments:

A Key Discussion Among Jews about Israel: Enno Raschke and Michael Lumish

I do not know where this conversation will lead. I know that I have considerable respect for Enno Raschke who is a researcher and historian for Yad Vashem, the World Holocaust Center, in Jerusalem.

I am a PhD in American History from the Pennsylvania State University who also writes on the unfortunate relationship between the western-left and the indigenous Judeans, i.e, the Jewish people.

I want to begin my discussion with Enno with a comment he made on a very brief Facebook post wherein I simply asked, "Are Arabs indigenous to Judea?" That was the entirety of the post.

In the comments, I referenced the fact that the denial of Jewish indigeneity is used as justification for western-left antisemitic anti-Zionism. The core anti-Zionist idea is that Jews stole Arab land. Enno quotes me directly:


"This is the core idea of Western antisemitic anti-Zionism and the driving notion behind BDS. It is, at least in part, what drives EU support for terrorism."

To which he responded:

Those two sentences are more a description of the mindset that created them than of actual reality. Antisemitic anti-Zionism has nothing to do with EU foreign policy.

EU foreign policy has always been based on the original idea that allowed for the creation of Israel in the first place: two states for two people. You can agree with that concept or not--I don't, at least not in the form the EU imagines a 2SS. There is, however, no denying that the EU concept used to be something even mainstream Israel agreed to--before people started to increasingly follow the hollow pipe dreams of the right over the last two to three decades.

The right has no concepts to offer. It has no credible plan for the Arab population in these parts--just as the Arab right-wing has none for the Israeli-Jewish population. So they create fog with talking points like that indigenous exclusivity claim--which is of course as pointless as it is ridiculous. But it allows for some chest-bumping, some cheap feeling of superiority and the usual tales about the fraudulent, deceitful, uncivilized "other."

The problem, however, is: At the end of the day, it doesn't change anything. It's just a futile exercise. The Israeli side will still have to come up with credible concepts and negotiate. Because the "other" will remain here.

I would like to build a conversation around this comment as a starting point if it is agreeable to Enno.

I would start with Enno's claim that:


Antisemitic anti-Zionism has nothing to do with EU foreign policy.

I am a bit surprised that Enno thinks so.

And I would certainly argue that the EU is anti-Zionist when it funds the murder of Jews in Israel via "pay-to-slay."

Mike Williams is both on-target and concise:


For all my 73 years I've known that if I wanted to start a political fight with a Dem/liberal all I had to do was complain that FDR knew about the Holocaust and did nothing.

Bombers dropped bombs on Germany day and night for years, but never was the infrastructure like the railroads to the work or death camps targets. Not even as secondary targets.

Now, we see that it was more than a presidential myopic view where he didn't want to be seen fighting a world war for the Jews. He actually went out of his way to derail anything that would have slowed or stopped the mass killings.

In the last few years embarrassing letters and official documents have surfaced that showed that the Brit's didn't want the killing to stop, or to see the German's use the Mideast as a dumping ground for Europe's Jews.

Or the fact that after the war Britain worked to destroy Israel even before it declared itself to be the one and only Jewish state....Germany certainly deserves the world condemnation for its war crimes, but there is enough guilt to go around that the Western allies like the US, France, and England didn't do anything to stop the destruction of European Jewry.

Are Arabs indigenous to Judea?

Of course, Arabs are not indigenous to Judea / Israel. Arabs are conquerers indigenous to the Arabian peninsula. If one cares about "the conflict" -- or what I call The Long Arab / Muslim War against the Jews of the Middle East -- then one must recognize the Jews as indigenous and the Arabs and Muslims as imperialists and colonialists.

And, yet, the progressive-left and the Democratic Party honestly believe that the Jewish defenders of Jewish children and Jewish land are the aggressors. They honestly believe that Arabs have every right to kill Jews as a matter of "resistance." It is an intelligent rhetorical strategy on par with the propaganda skill of the National Socialists.

The brilliance behind Arab and Muslim imperialism is that they actually managed to convince the arrogant and ignorant Euros that they are the indigenous population in the lands that they conquered.
Posted by Mike L. at 5:26 AM 7 comments: