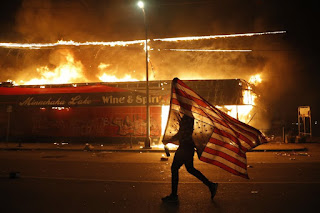 America now experiencing some of those "peaceful protests," we always hear about in Gaza. 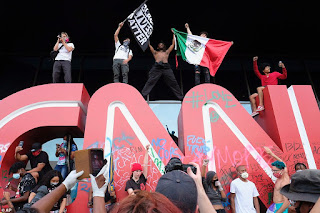 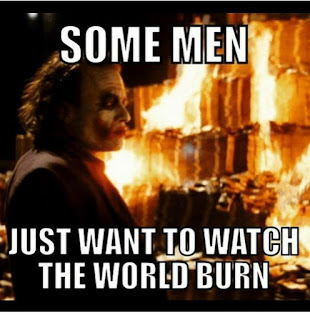 A summary of anti-Zionism

Einat Wilf once observed that "to one who is used to privilege, equality feels like discrimination." Many do-gooders in this country use that to observe today's Israel through the lens of today's reality arising de novo. Through that lens, they see Israel's Jews enjoying privilege and thus interpreting Israel refusal to concede to a refusal to yield that privilege.

These do-gooders' error is that they think that the Jews' history there began in 1948, or perhaps in 1917. What they miss is that there was a Jewish history there in the 19th century and before. A couple vignettes would convey a critical element of that history. In the 1830's, a pasha who had issued a land-lease to a group of chasidim was replaced with a pasha who did not renew it giving the surrounding Arabs license to give those chasidim 24 hours to vacate their plot of land. In 1860, the Arabs of Hebron freely massacred the Jews in their city. What these incidents demonstrate is that the Arabs enjoyed privilege in Palestine prior to anyone thinking of Zionism.

Zionism's success has upended that privilege. The Arabs have reacted to that loss of privilege the way every other group that lost privilege has reacted. Anti-Zionism says that they are right to be aggrieved about their lost privilege.
Posted by Sar Shalom at 9:59 AM 9 comments:

What supporters of Israel should seek from Biden

With the possibility that the Trump Administration might come to an end next January, the question is what should supporters of Israel seek from Biden, or whoever replaces him on the odd possibility that the Democrats are forced to find a substitute. One could argue that we should ask Biden to pledge not to use the Security Council as a tool to bludgeon Israel into compliance with his demands. Another possible request is that Biden refrain from public fights with Israel, that he refrain from harping on about the settlements, or that he talk with mainstream Israelis before formulating his diktats.

I would like to suggest something else that we should seek from Biden. This is because, for one, pledges during the campaign have a way of falling by the wayside once in office, as we saw with Obama and his promises to the pro-Israel community. Furthermore, what I suggest can also deliver benefits for Israel if Biden does it even before the election, let alone getting inaugurated. What I suggest we ask for instead is that Biden declare over and over again that the Palestinian national movement (PNM) has a Trump-like dedication to the truth and that he provide fact after fact to buttress that claim.

There is no shortage of material with which to support that claim. To start, there is the claim that the Jews have no connection to the land of Israel or Jerusalem and thus the Israelis are interlopers who do not belong on the land. A variation is that today's Jews are really Khazars with no connection to any real Jews of the past who did live as a sovereign entity on the land, with the same consequence that Israelis are interlopers. A corollary is that the Palestinians are descended from either Jebusites or Canaanites and thus have roots to the land preceding the Jews. Turning to current events, Palestinian nationalists have a habit of lifting photos of atrocities from all over the world and slapping captions on them stating that Israel had done that to the Palestinians. When actual conflict occurs between Israel and the Palestinians and Israel actually does cause the death of some number of Palestinians, the Palestinians habitually exaggerate the number of casualties and claim that their fallen combatants were actually non-combatants. The list could go on.

If Biden were to force the media to contend with those facts and then state based on that that the PNM is as committed to the truth as is Donald Trump, conditions would be set to erode western sympathy for the PNM. Once it is accepted that the PNM is no more truthful than Donald Trump, we can press the case to those who just want to see an equitable end to the conflict that they should not take the PNM's claims at face value that they only seek the 1967-territories and thus should not assume that prevailing upon Israel to fulfill the PNM's demands would actually end the conflict. Convincing the public that the PNM is no more truthful than Donald Trump would allow us to set a condition for any concession that the mainstream media would support, that the PNM should acknowledge basic truths. None of those benefits require the enactment of any policies.
Posted by Sar Shalom at 9:00 AM 16 comments:

Email ThisBlogThis!Share to TwitterShare to FacebookShare to Pinterest
Labels: narratives 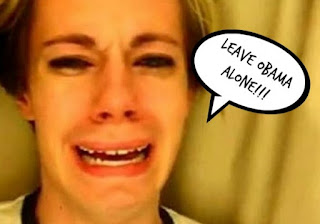 So what if he tried to stage a coup to try and topple Trump before he even took office? This is Obama we are talking about. He musta done it for a damn good reason. It's not like he ever did anything else wrong, right?

So, just leave Obama alone and impeach that hooker-bed peeing Russian agent, Trump. Again. And think twice before you ever have the nerve to elect someone the Democrats don't like.