The March Of Return Suicide Gig

Another Friday, another dead Gazan protester, another outraged world community, upset that Jews won't let their country be invaded by bloodthirsty Gazans who just want to kill Jews. The March of Return, originally a planned 6 week protest, was co-opted by Hamas and now goes on every Friday. When I began looking at this, I was struck how almost every single Israeli news outlet framed the event as "mostly peaceful." This, despite the fact that someone almost always dies and dozens are injured while throwing firebombs, grenades and trying to invade Israel. They do no one a service by being PC and calling the riots mostly peaceful. They only encourage them and their cheerleaders around the world.

Israel's use of deadly force was condemned on 13 June 2018 in a United Nations General Assembly resolution.[44] Condemnation has also been levied by human rights organizations, including Human Rights Watch,[45] B'Tselem,[46] and Amnesty International,[47] and by United Nations officials.[48][49] Kuwait has proposed two United Nations Security Council statements, which have been blocked by the United States, calling for an investigation into Israel's killing of Palestinian protesters.[50] The Israeli government has praised Israeli troops for protecting the border fence.[48] Media coverage of the events, and what has been termed the "PR battle", has been the object of analysis and controversy.[51][52][53][54] In late February 2019, a United Nations Human Rights Council's independent commission found that of 489 cases of Palestinian deaths or injuries analysed only two were possibly justified as responses to danger by Israeli security forces, deeming the rest illegal, and concluded with a recommendation calling on Israel to examine whether war crimes or crimes against humanity had been committed, and if so, to bring those responsible to trial


The world community can't understand why evil Jews want to avoid being killed and replaced by peaceful Palestinians. Geeze, they went so quietly back in WW2.
Posted by Doodad at 2:08 PM 15 comments:

How Will Impeachment Play Out For Democrats 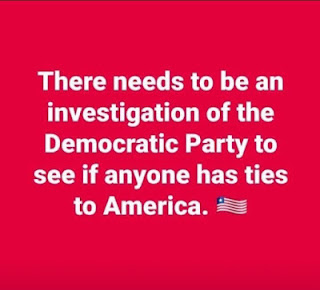 The question of Ashkenazi Jewish "whiteness" is receiving increased attention.

If to be "white" means anything it means to be of European descent. But in today's western-left political culture what it really means is "bad, racist, colonialist, imperialist, hater of all-things-good."

In other words, it means to be a contemptible person.

To be "white" no longer merely suggests ethnicity, but a toxic ontology (way of being) and a toxic epistemology (way of knowing.)

Ironically, this racist view of "whiteness" primarily derives from those who claim to be the ideological descendants of Martin Luther King, Jr. If King stood for anything, however, he stood for judging people according to character, not ethnicity and not gender. Those who despise "whiteness" assign this racial category to Ashkenazi Jews in order to spread that hatred onto one of the most persecuted peoples on the planet. This tendency among "progressives" is nothing if not illiberal.

It is, at least in part, for this reason, that many American Jews are walking away from the progressive-left and the Democratic Party.


The reality is that the entire notion of Ashkenazi Jews as “White people” is very new (from a historical perspective) and it is also completely detached from any historical context, including in America, where, as recently as the early 1960s there were still quotas on Jewish enrollment in some Ivy League schools. Ironically, since the origin of the European pseudoscientific racial classifications (dividing humanity as White, Black, and Yellow races); Jews in Europe (both Ashkenazi and Sephardi alike) were regularly persecuted on the basis of being “non-white.”

And the fact of Jewish indigeneity goes to the very heart of the Movement for Jewish Freedom, which we affectionately call "Zionism."
Posted by Mike L. at 7:22 AM 39 comments:

My bet is that it will be Trump versus Biden in the presidential election of next year. It is a fairly obvious forecast. It is unlikely -- although it is possible -- that Sanders or Warren could take the Democratic nomination, but we shall see.

Thus Biden will be derided by the Democratic Party base as too old and too "white"... whatever that means, specifically. And they will do so without recognizing their own bigotry toward the guy.

Therefore, Biden will need to hold off not only the Republican Party but the Democratic base, as well.

I neither voted for Trump, nor did I advocate for him, but my prediction is that he will win in 2020 for pretty much the same reason that he won in 2016. And this time I might vote for him as a protest vote against The Haters, i.e., those who despise "whiteness" and "toxic masculinity" and "Zionists."

If the Democratic Party loses in 2020 -- which is my prediction -- the most significant factor will be "politically-correct overreach"... particularly on the campuses, both high-tech corporate and academic.

In this piece titled, The Real “Real Reason the Left Hates Israel”, Vic Rosenthal does a concise job of breaking down the ideological backdrop and sources of contemporary western-left anti-Jewish racism and hatred for Israel.

I don't think that I would call Rosenthal "New Center," but like the New Center he identifies postmodernism, postcolonialism, and intersectionality as representing interlocked ideological constructs that, taken together, provide the justification for the never-ending harassment of Israel as the "Jew among nations."

Ultimately, without saying so directly, Rosenthal provides an explanation for how it is that the EU pays, and the Democratic Party wants to pay, the Palestinian-Arabs to keep up their ongoing war against the Jews, as it did under Barack Obama.

I wonder what percentage of the funds gifted to the Palestinian Authority go into the so-called "Martyrs' Fund"? This is when Arabs are paid by the PA, via the European Union -- and prior to Trump, by the United States -- to murder ordinary Jewish people in the streets of Jerusalem. We know it as "pay-for-slay." Within the United States, it is the Democratic Party that coughed-up those hundreds of millions of dollars for Mahmoud Abbas' mansion and the "pay-for-slay" program.

Yet, somehow -- against all reason and decency -- the Democrats still believe that they deserve American Jewish support and most American Jews are still willing to give it to them.

This is why Israeli Jews are becoming increasingly disgusted with American Jews who, for allegedly the noblest reasons, continue to support the progressive-left enemies of the Jewish people.
Posted by Mike L. at 4:25 AM 22 comments: