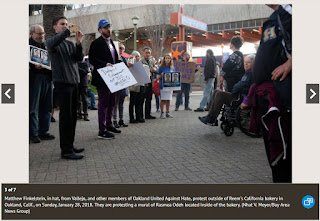 Evidently, according to Arab Resource and Organizing Center spokeswoman Lara Kiswani, a security team was needed to protect Reems from these dangerous Jews. (Excuse me while I wipe the coffee from my monitor.) Kiswani, of course ripped posters from the hands of at least one of these dangerous Jews last time. Probably thought the posters contained Ricin or something.

Evidently the security team worked since from all reports the event was peaceful and not one of those dangerous Jews set off a suicide bomb in the hopes of getting their own mural in some Dangerous Jew Kosher restaurant someday.

And now I need to go pop a few Advil because of all the head shaking I have been doing.
Posted by Doodad at 9:25 AM