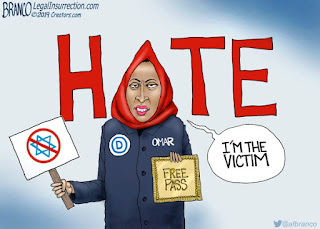 Oops, she did it again. Ilhan Omar, that is. Fresh on the heels of "it's all about the Benjamins," she talked about dual loyalties. allegiance to a foreign country. That's two antisemitic tropes in quick succession in addition to the many other gaffes she has made previously. A pattern seems obvious. The woman is an antisemite to the bone. Even Pelosi and other high ranking members are getting ready to bring a resolution condemning antisemitism although it looks as if Omar will not be mentioned specifically. Obviously though, the resolution is in response to Omar's loose lips. Dems cannot afford to be seen as the party of antisemitism prior to 2020.

Generally, Progressives are supporting her; certainly her fellow newly elected peers AOC and Tlaib, Linda Sarsour, and most Kossacks. They give the usual suspect reasons; criticism of Israel is not antisemitism, etc. The most amusing rationale is that being a Somali Muslim immigrant, she does not understand what is wrong with what she is saying. Also, she is new to Congress and politics so she should be cut some slack. Hence my question: IQ Tests For Congresscritters? Or perhaps some minimum knowledge/training in what constitutes criticism of Israel and what constitutes antisemitism. I believe it is possible to criticize Israel without being antisemitic but I don't believe Omar and her cronies do that.

In fact, looking at how this has tracked in relation to the Labour Party's mess in the UK, I believe that what is really happening is a deliberate attempt to normalize antisemitism in the guise of AntiZionism. There is just too much evidence that this is what has happened in the UK and elsewhere. AntiZionist groups are rife with antisemitism and disingenuous defence of the perps.

Sooner or later, Omar and others must be censured before the Dems indeed become the party of antisemitism to an even greater extent than they already are. The ball is in their court and Pelosi's response while welcome is a dollat short and many days late.