The Mueller Report Is Out

After a long and trying wait, the Mueller report is finally out. We don't know the specifics yet although Barr has said he should be releasing info as soon as this weekend within the parameters of what the law allows. This could mean we only receive a smidgen of what is in the report although
Dems are insisting we hear it all. And, of course, there are bound to be leaks.

What is most glaring is the news that no new indictments are forthcoming. This is huge in terms of the hopes and dreams of Dems that Trump and family and associates would be found guilty of something. It probably means that there are no findings of collusion although many Dems are saying that there may be sealed indictments or that Mueller has offloaded fuether indictments to other law enforcement agencies. hope springs eternal for the Trump is a Russian agent crackpots.

And those crackpots are numerous among Dems, the complicit media and the spook community. How many of them have assured us that Trump and those around him were going down big time? Doesn't look that way to me.

A question that needs to be addressed is how can now trust anything that crowd has told us. Certainly, they seem as kooky as flat earthers and the moon landing was a hoax crowd. Hopefully the American electorate will keep that in mind as 2020 approaches and make them pay politically. Personally, I would like to see them in other ways for the time and resources that have been wasted; the lives and careers that have been ruined and the horrible divisiveness this has caused. 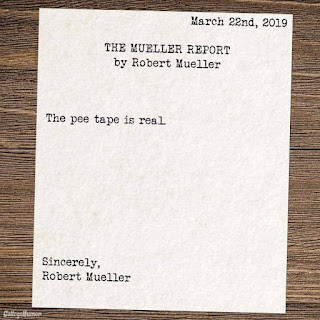