After initial encouraging reports that Arab states were supporting the Deal of the Century, the Arab League rejected it.

All three nations — Bahrain, Oman and the United Arab Emirates — on Saturday backed an Arab League decision that rejected the US plan, seemingly dashing any hopes the administration may have had of Arab support for its efforts......“These are clauses no Arab or Islamic nation could agree to, so in the end the foreign ministers aligned with the position opposed to the Trump plan.”


The clauses of which they speak, of course, are Islam related: a feeling that the US was promoting a change in the status quo. And therein is the rub. The Islam factor. The mere thought that Jews might trump (no pun intended) Muslims is too much to bear and the all encompassing nail in the coffin of all and every so called peace plan. And as much sense as a prosperous Palestinian state makes to westerners, it ignores the Islam factor and the honor/shame culture Islam creates.

Everyone thought Arab states were coming around and they feared Iran more than anything until it all hit that brick wall;Islam. Kushner told the Palestinians to give up "fairy tales," for peace totally unaware of the terrifying and stupefying pull of the Islam factor.

And so it goes, eternally. Oh BTW, the Arab League rejection was UNANIMOUS. Big surprise.

NOTE: didnt want to start a whole new thread just for this so....added this neat cartoon here. I just know Vindman and Greta probably love them some cuddly Palestinians. 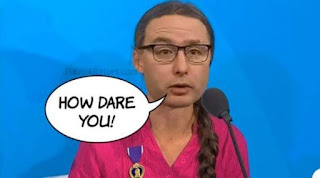