I am Free from Reem's Racist Stupidity!

{Also published at Elder of Ziyon and Jews Down Under and The Jewish Press.}


Reem Assil and her malicious, anti-Zionist friends challenged the First Amendment to the Constitution of the United States and promptly got their legalistic butts kicked.

Anyone who followed the story of Assil's extremist and terrorist-admiring restaurant at the Fruitvale BART Station in Oakland knows that her attorneys dismissed her malicious "lawfare" action against Bob Pave, Robin Dubner, and myself.

This was due to the insightful work of Mitch Danzig, Evan Nadel, and Paul Huston of the law firm, Mintz Levin.

Speaking strictly for myself, I owe those gentlemen a significant debt of thanks.

There are, however, a few loose ends dangling that I want to tie up.

The first is that I owe an apology to StandWithUS, particularly Randy Kessler, Executive Director of the Northwest chapter.

And I owe a big tip 'o the kippa to Yael Lerman, Director of the SWU legal department.

{Were I her I do not know that I would have been quite so nice to me.}

When, during the vigils, it looked as if we would get zero support from the larger San Francisco Bay Area Jewish community, I lambasted that organization and stormed into Kessler's Facebook space with a self-righteous fit.

It was inappropriate, unfair, and I was wrong to do it.

Nonetheless, despite my bad manners, SWU did more to help the ongoing vigils at Reem's than any synagogue or other Bay Area Jewish organization.

After coming out of this nonsense, however, I have one significant message.

The western-left is not a friend to the Jewish people and "intersectionality" as expressed within left-leaning politics is racist.

This is my "takeaway" from all of this mishigas.

There are plenty of self-identified progressives and "liberals" who are, indeed, great friends of the Jewish people and of the State of Israel. I do not mean to insult or castigate my progressive friends, but the obvious fact is that the western-left, in general, is unfriendly toward Israel. 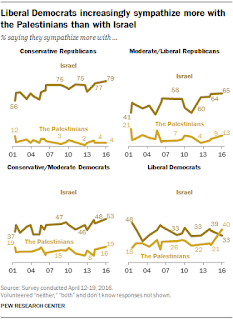 According to recent Pew polling 40 percent of "liberal Democrats" support Palestinian-Arabs over the Jews in the Middle East, while only 33 percent favor the Jews.

Those who stood up with me against Reem's racist restaurant included members of the LGBT community and a survivor of the Warsaw Ghetto, yet we were called both homophobes and White Supremacists by the "progressives" who opposed us.

This is what the Left has descended into.

The people who confronted our vigil and who outnumbered us by a factor of at least three-to-one were entirely from progressive-left organizations and pro-Palestinian groups.

Despite all the evidence that is available - as Professor William Jacobson from the Cornell University Law School readily demonstrates - they still prefer to believe that Rasmea Odeh's confession was beaten and raped out of her over twenty-five days, despite the fact that the records show she admitted her guilt on the day immediately following her apprehension by the Israeli authorities.

We even have Aisha Odeh, Rasmea's partner, boasting of the murders and implicating Rasmea on Palestinian Authority television many years later.

The International Red Cross observed the trial and found it to be fair.

What more can anyone want?

Intersectionality and the Killing of Oscar Grant

It should also be noted that on the mural of Rasmea Odeh at Reem's bakery-cafe is a button or badge reading "Oscar Grant."

Oscar Grant was the young black man shot dead by Oakland police on New Year's Eve 2009 on the platform of the Fruitvale  BART Station within spitting distance of Reem's joint. The shooting sparked riots in Oakland and Reem Assil is trying to associate Rasmea Odeh with Oscar Grant for the purpose of associating Palestinian-Arab antisemitic anti-Zionism with the movement for "social justice" in the United States.

She is exploiting that movement and, in the process, is suggesting a sort-of ideological kinship between Grant, who was a victim, and Odeh, who is a murderer of innocent people. It seems to me that the Black community should be unhappy at the implied comparison.

These separate forms of alleged injustices are all thought of as sewn from the same racist and rapacious ideological cloth.

Meanwhile, the idea that Jewish nationalism must be crushed while Palestinian-Arab nationalism must be celebrated is racist, yet this is precisely what Assil is promoting by shoving Rasmea Odeh into the face of anyone who happens into her place. Since Odeh is a murderer in the cause of antisemitic anti-Zionism the message is that violence toward Jews - even to the degree of blowing people to smithereens - is honorable.

This is shades of 1930s Berlin and every Jew who passes that mural on the way into the Fruitvale BART Station has been put on notice.

Western-left intersectionality and the related identity politics, as practiced today, dockets people according to a racialized and gendered hierarchy of victimhood. The value of the individual depends on where they fall within the hierarchy. Jewish people, and particularly Jewish men, are at the very bottom of the hierarchy - along with men of European descent - and thus killing Jewish people is considered understandable under the toxic logic of progressive-left intersectionality and identity politics.

Within progressive-left identity politics the murder of Jews is simply an expression of the Palestinian-Arab "resistance" to Jewish oppression. Assil and her friends consider Odeh innocent not because of the evidence - which clearly demonstrates her guilt - but merely because they want her to be innocent. And even if she is not, her actions were fully justified as a matter of the "liberation" of the Palestinian-Arabs.

Such a view is nothing more, nor anything other, than genocidal racism toward the Jewish people.

A Dash of Jewish History

For thirteen centuries the Jews of the Middle East suffered under the heel of Arab-Muslim imperial rule, along with the Christian population, within the system of dhimmitude as we call it in the West.

Although dhimmitude varied from century to century, and within the various areas of Arab-Muslim dominance, it was never better than Jim Crow at its worst.

And we had to pay the jizya, otherwise known as "protection money." The formal process of that payment was designed to be a humiliating experience for the purpose of reinforcing our lowly place within Arab-Muslim culture.

Furthermore, the Palestinian-Arabs have turned down every single offer for statehood from the Peel Commission of 1937 until this moment and the greater Arab nation, which outnumbers the Jews of the Middle East by a factor of 60 or 70 to 1, have never ceased trying to destroy Israel and thereby reduce the Jews who survive back to second and third-class non-citizenship.

And, yet, intersectionality in the mouths of western-leftists blames the Jewish people for the never-ending Arab-Muslim, Koranically-based hostility toward us.

When I attended the first vigils at Reem's restaurant my grievances with the progressive-left were largely theoretical. It seemed clear to me that by embracing various forms of racism - such as anti-white racism, antisemitic anti-Zionism, and what Manfred Gerstenfeld dubbed "Humanitarian Racism" - and through their growing opposition to freedom of speech, that the Left was (and is) shedding its liberalism and, thereby, hollowing-out its very reason to be.

{Progressivism without liberalism is authoritarianism, after all.}

Now, however, the criticisms have moved from the theoretical to the personal because Assil and her supporters tried to drag me into court for the purpose of shutting down my freedom of speech. People have suggested to me that this was a test case designed to challenge the American commitment to that primary freedom.

From where I sit, despite the howling of precious snowflakes from UC Berkeley to Columbia University, the First Amendment of the Constitution remains strong.

Now if only we could somehow get more Jewish people, and friends of Jewish people, to understand that the mural of Rasmea Odeh at Reem's remains an ongoing call to violence against the tiny Jewish minority wherever we may be in the world.

What does it say about a political movement that it venerates a genocidal Jew murderer in the name of "social justice"?

As a matter of fundamental human decency, the mural of Rasmea Odeh should be removed from Reem's racist restaurant.

I have been in touch with Terry Joffe Benaryeh who has a piece in the Times of Israel concerning the murder of Edward Joffe entitled, The day joy vanquished my terror.

My guess is that she and her family would heartily agree.