{Also published at Jews Down Under, the Elder of Ziyon, and The Israel Forever Foundation.} 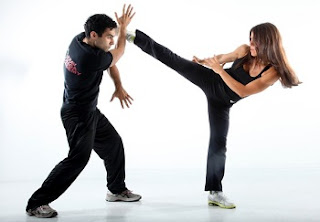 When I was a tiny, little Zionist growing up in New York and Connecticut in the 1970s and 1980s, Jewish youngsters did not learn Krav Maga.

I doubt any of my friends, Jewish or otherwise, ever even heard of this martial art.

We punched a nose when we had to, just as every other boy did, but it was a regular part of growing up. We were teens and pre-teens and made of rubber.

My neighborhood was middle-class and ethnically mixed. Sometimes the kids were working on their cars in their parents' garage. We would call them "clutch-heads." They tended to be Catholic and they sometimes wore leather jackets. Tough boys, y'know. There were also the "freaks" -- the children of the Counterculture and the New Left -- who wore long hair and denim with patches and listened to the Dead and the Stones and Zep on the cusp of the New Wave and the Reagan Administration.

And then there were the "jocks" and the "norms" and whatever.

These are the terms that we used at the time.

"Freaks" and "Jocks" and "Norms" and "Clutch Heads"... at least at Trumbull High School, just outside of Bridgeport.

And sometimes fights would break out. Almost nobody ever got seriously hurt and even the parents did not worry too much about this kind of thing, because they grew up with it, themselves. Kids have to work out their own personal relationships just like everyone else, but the parents usually did not get involved. It was always pretty much left up to the kids in the street because it was primarily harmless.

The folks were trying to make a buck and after school, we were pretty much on our own as teens and pre-teens. But it was natural as a young man growing up to learn how to throw a punch. You did not need to be Jean-Claude Van Damme, but it was definitely helpful to know how to defend oneself. You had to be willing to fight because none of us respected a kid who was too cowardly to stand up for himself. You did not even need to be particularly big and strong because, as my old hero Yankees manager Billy Martin said, "It is not the size of the dog in the fight, but the size of the fight in the dog."

I was recently in conversation with a friend of mine -- an old online sparring partner -- who studies and teaches Krav Maga in the San Francisco Bay Area. I contacted him because it seems obvious to me that diaspora Jewish kids need training in martial arts.

Anyone who looks fairly at the situation in Europe can see that our Jewish brothers and sisters are under the gun. The Labour Party, with Jeremy Corbyn in Britain, is fighting off charges of intense antisemitism even as the country is grappling with Muslim gang rape issues. One of the options in response is Jewish self-defense.

In truth, I would love to see the Hillels introduce Krav training as part of their regular curriculum.

The basic criticisms that would come from the Hillels and other Jewish organizations is that the very last thing that they want is to be seen as antagonistic or militaristic or pugnacious. This is entirely understandable. The Jewish population in the United States is somewhere between one and two percent of the total. But the thing is, anyone who knows anything about martial arts knows that you learn how to fight so that you do not have to.
Posted by Mike L. at 7:47 PM