What is "whiteness," anyways?

It always cracks me up when people say that the progressive-left or Antifa cannot be anti-white because they are white. Well, BLM is primarily white also, yet still very anti-white.

This is no longer the case.

To be white, in today's parlance, is no longer merely about an ethnic background but thought to encompass toxic ways of being (ontologies) and toxic ways of knowing (epistemologies).

Thus any black people -- like, say, Candace Owens or Larry Elder -- who opposes what they sometimes call the "Democratic plantation" is deemed no longer to be black. They are suffering from "wrong-think" or what was called among an earlier generation of Socialists "false consciousness."

And that is why the idiot in the picture below, despite apparently being white himself, wants to abolish "whiteness." He does not mean that we should commit genocide against people of European descent. What he means is that white ways of thinking and being must be undone.

The only way to accomplish something quite so ridiculous is to undermine the Western intellectual tradition, itself.

Orange may be an evil color, but white is beyond redemption. 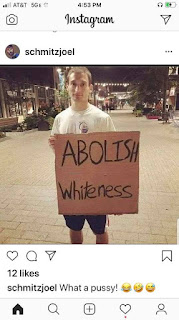