Do they elect a far-right, possible bigot and antisemite who will do a lot to solve the immigration/terrorist problems France is experiencing or will they elect the centrist who won't? Macron supports an open door immigration policy and has expressed confidence in France's ability to absorb more immigrants and welcomes their arrival into Europe, asserting that the influx will have a positive economic impact. His proposal to provide each young adult a "Culture Pass" of 500€ which may encourage young people to discover the culture of France and deter terrorism suggests he is somewhat of an idiot but what the heck; this is France after all and if they were that smart they wouldn't have the almost daily terrorism problems they now experience. It's so frequent, one would almost think they were occupying Palestine or something.

I suspect they will elect Macron and live with the consequences. I don't really care because I don't like Le Pen either and I have never forgot France's awful collusion during the Holocaust. 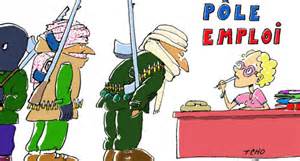