On the need for American Jewish parity between Democrats and Republicans

{Also published at Jews Down Under, the Elder of Ziyon and The Jewish Press.} 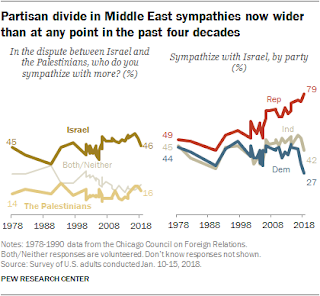 One of the vital questions facing US diaspora Jewry is how to respond to the rise of American-Left antisemitic anti-Zionism.

The prominent faces of that movement include anyone who looks toward Louis Farrakhan as a positive figure in American cultural and political life. These include low hanging fruit like Linda Sarsour, Tamika Mallory, and potential California State Assemblyperson, Maria Estrada... not to mention Keith Ellison, Barbara Lee, and Maxine Waters.

Nonetheless, according to 2018 Pew polling, a mere 27 percent of Democrats sympathize with Israel while 79 percent of Republicans favor the Jewish minority in the Middle East over their Arab aggressors.

This is Alan Dershowitz's worst nightmare.

The guy devoted his life to supporting civil liberties, Israel, and the Democratic Party -- not necessarily in that order -- but now he's fast becoming a relic in the minds of very many Democrats, particularly among the younger snowflakey regressive set who very much dislike his ongoing support for his own people.

American Jews, and our friends, mainly respond in two ways to the rising disdain towards us within the Democratic Party. The prominent inclination is to work within. My response was to bow out. From Jimmy Carter to the first term of Barack Obama, I was a devoted man of the Left and a Democrat. But when I saw, ten years ago, now, that the Democratic Party was making a home of itself for antisemitic anti-Zionism I began to speak up. And, not surprisingly, when I spoke up I was also slapped down.

I have lost real-life friends over the fact that I refuse to stand with a political party or a political movement that supports the racist effort to boycott, divest from, and sanction (BDS) the lone, sole Jewish State.

Fred Maroun, who I have discussed before in these pages, is an interesting guy and a good friend to Israel. Like many critics of Arab political tendencies, he is of Lebanese Christian descent. Fred disagrees with me entirely. He argues, not unreasonably, that left-leaning American Jews who care about Israel need to stay and fight within the Democratic Party.

Dershowitz always argued that we should maintain a bi-partisan consensus in support of Israel and who among us would disagree with that? Of course, we want the support of all of our neighbors and friends throughout the country. But the polling data clearly shows, and from a million bits of anecdotal information, we can see that the Democratic Party is abandoning our fellow Jews in the Middle East.

27 percent are in sympathy with them.

That is a very difficult number for me to swallow.

I find it unreasonable and counterproductive for Jewish Americans to support the Democratic Party in figures above the 70th percentile while the Democratic Party supports Jewish well-being in numbers below the 30th percentile. Thus my argument is that we should not allow ourselves to be taken for granted and should make a get-away. Through supporting the cause of Palestinian-Arab nationalism they are throwing the Jewish people to the wolves, so who needs them?

If we can get Jewish participation in the Democratic Party down to something close to parity with the Republican Party than they can no longer take us for granted.

In the meantime, I salute our friends -- Jewish and otherwise -- who are working within the Democratic Party to push against the rising antisemitic anti-Zionist tide flowing over them. I am not opposed to pro-Jewish Jews working for our interests among Democrats.

I simply do not want us taken for granted by people who obviously do not care about what happens to our brothers and sisters in Israel.