The anti-Zionist "Dynamic Duo" and the Brazilian Toxic Cartoonist

{Also published at The Jewish Press.} 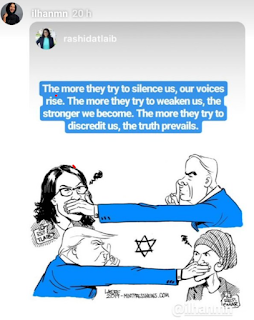 Carlos Latuff is the most prominent antisemitic anti-Zionist cartoonist in the world and has recently done a scribble lionizing everyone's favorite American racists, Representatives Rashida Tlaib (D-Michigan) and Ilhan Omar (D-Minnesota). For at least a decade his work was (and is) featured in various publications including The Globe Post, Le Monde diplomatique, The Toronto Star, the Islamic Front for the Iraqi Resistance (JAMI) magazine, Mondoweiss, and even the Brazilian version of Mad magazine.

As a Lebanese-Brazilian proponent of BDS and Jew-Hatred, his scratchings persistently equate Israel with Nazi Germany. The overall body of his work suggests that Nazi Germany is to Israel as Jews in Nazi concentration camps during World War II are to contemporary Palestinian-Arabs.

“'Of course Israel isn’t building gas chambers in the West Bank, but surely we can find some similarities (my emphases) between the treatment given to Palestinians by the [Israel Defense Forces] and the Jews under Nazi rule,' Latuff said, according to Fox News."

“'My cartoons have no focus on the Jews or on Judaism. My focus is Israel as a political entity,'” he said without explaining why it was necessary to use anti-Jewish tropes to attack the Jewish state."

Yes, surely we can find some similarities between Nazi Germany and Israel and if there are none we can just manufacture whatever malicious nonsense we want.

As an anti-Zionist, needless to say, Latuff does not believe that the Jewish people deserve a state.

His most recent cartoon comes directly on the heels of Tlaib and Omar's Israel fiasco, wherein Tlaib actually refused to visit her 90-something-year-old grandmother in a town just west of Ramallah if the Israelis insisted that she could not take it as an opportunity to kick Jews in the teeth by promoting BDS. This particular cat-scratch shows Israeli Prime Minister, Benjamin Netanyahu, putting a forefinger on his lips while covering Tlaib's mouth with his other hand. Beneath that we see the exact same posture but with Donald Trump endeavoring to silence the cute-as-a-little-anti-Zionist button, Omar. Above the image are the words of Tlaib from a tweet reading, “The more they try to silence us, our voices rise. The more they try to weaken us, the stronger we become. The more they try to discredit us, the truth prevails.”

The basic message of the cartoon is that Tlaib and Omar are honest actors who represent truth, justice, and the Palestinian / Somalian way, while Netanyahu and Trump are covering for the heinous crimes of the Jews. I would suggest "Israeli Jews," but we all know that antisemitic anti-Zionists, such as Latuff, Tlaib, and Omar, hold the pro-Israel Jewish diaspora as complicit in the supposed crimes of our brothers and sisters in Israel.

Among other such gems, we have a 2007 thing showing a tremendous American Bald Eagle straddling Africa. The claws of the monstrous bird bleed that continent while its enormous beak rips a gaping crimson hole out of north-eastern South America around the location of Venezuela. This obviously shows us what he thinks of the United States.

A recent 2019 scratch shows Israeli soldiers off-boarding a jet in Brumadinho, Brazil in order to assist in the saving of Brazilian lives after a toxic waste dam collapsed killing at least eighty-four people and displacing hundreds of others in January of this year. The Israeli soldiers are greeted on the tarmac by a figure representing Jair Bolsonaro, the President of that country, saying "Welcome to Brumadinho!" In response, a smiling Israeli soldier says, "Sorry for our delay! We're busy killing Palestinians!" The headline preceding the scratch reads, "Brumadhinho: Israel's Publicity Stunt in Brazil." Thus, when Israel undertakes a humanitarian operation within Latuff's country, he uses it as a cynical opportunity to defame the Jewish State, if not the Jewish people of Israel, more generally.

In a blurb directly above the malicious scratch, Latuff wrote:

"Now this contingent of the Israeli army (IDF) was sent to Brazil as “humanitarian aid”, coming from an army which routinely oppresses, brutalizes and kills Palestinians in the occupied territories. It may sound like a joke. A joke in bad taste! Like “pinkwashing” and other PR strategies, this is just another stunt in order to whitewash Israel’s gross human rights violations in the occupied territories of Palestine."

Latuff, it must also be noted, came in second place with a scratching for Iran's International Holocaust Cartoon Competition equating Palestinian-Arabs with Jews in Nazi concentration camps, a theme which is a specialty for Latuff. It should not, therefore, surprise the fans of the Democratic Party's anti-American, anti-Zionist, antisemitic "dynamic duo" that they were proud to share the recent defamatory Latuff cartoon with the world on their Instagram accounts.

Ronn Blitzer, of FOX News, tells us, "It is unclear whether Tlaib or Omar were aware of Latuff’s history when they shared the recent cartoon. Fox News reached out to both lawmakers, but they did not immediately respond."

Perhaps by the time you read this they will have responded, although it is highly unlikely that they would do so on or for FOX. Nonetheless, there is no possible way that people as up to their necks in the antisemitic anti-Zionist cause could possibly have been unaware of Carlos Latuff. He is famous for delicious hatred in their circles.