ISIS as a Strategic Tool?

Professor Efraim Inbar of Bar-Ilan University, in Israel, and the Director of its Begin-Sadat (BESA) Center for Strategic Studies has a piece for Israel National News entitled, "The destruction of ISIS is a strategic mistake."

When I first glanced at that headline I thought, "Good lord, man, you must be joking."

ISIS is the foremost Islamist organization operating in the world today with the possible exception of the Muslim Brotherhood who they make look like a bunch of pansies.

ISIS is committing a genocide against the Christians of the Middle East and it does not take much imagination to understand what they would likely do to the Jews in the region if they could get their claws on them.

ISIS bulldozes, and otherwise destroys, priceless antiquities that represent the very birthright of humanity, such as the ruins at Palmyra. 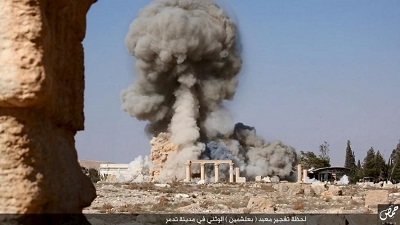 So when Professor Inbar suggests that "a weak IS is, counterintuitively, preferable to a destroyed IS," I certainly agree that it is counterintuitive. In fact, I thought that it was nuts! Political Islam is to the twenty-first-century what Nazism was to the twentieth. The analogy, obviously, is far from perfect, however both movements are (or were) racist, fascistic, violent, and very much in need of going away.

I have been arguing for a few years, now, that the West needs to crush ISIS in the way that it did Nazi Germany. These are the very worst actors in human history since Pol Pot and the Khmer Rouge were joyously romping through Cambodia, slaughtering as they went and putting college professors to the digging of ditches.

Professor Inbar notes that "US Defense Secretary Ashton Carter recently gathered defense ministers from allied nations to plan what officials hope will be the decisive stage in the campaign to eradicate the Islamic State (IS) organization."

However, he considers this to be a strategic mistake.

He argues the following:

1) A defeated ISIS will create a terrorist "diaspora" that will spread murder and mayhem elsewhere in the world. He writes:


If IS loses control over its territory, the energies that went into protecting and governing a state will be directed toward organizing more terrorist attacks beyond its borders. The collapse of IS will produce a terrorist diaspora that might further radicalize Muslim immigrants in the West.

2) An ISIS that is reduced to a pathetic shadow of its current self would not very well inspire the longings of potential Junior Jihadis, either in the Middle East or elsewhere.

But his primary argument is, number 3, the following:


The continuing existence of IS serves a strategic purpose. Why help the brutal Assad regime win the Syrian civil war? Many radical Islamists in the opposition forces, i.e., Al Nusra and its offshoots, might find other arenas in which to operate closer to Paris and Berlin. Is it in the West’s interests to strengthen the Russian grip on Syria and bolster its influence in the Middle East? Is enhancing Iranian control of Iraq congruent with American objectives in that country? Only the strategic folly that currently prevails in Washington can consider it a positive to enhance the power of the Moscow-Tehran-Damascus axis by cooperating with Russia against IS. (My emphasis.)

So, the professor's fundamental idea is that the West can, essentially, use ISIS as a strategic tool in its contest with Russia, Iran, and Syria.

For a moment I thought that maybe Professor Inbar was on to something until I detected a clear flaw in his logic.

The essential idea seems to be that eliminating ISIS would "enhance the power of the Moscow-Tehran-Damascus axis...".

Given the fact that ISIS is an enemy to all three there is logic to the argument.

What fails to convince, though, is how it is that a weak and pathetic ISIS could possibly represent a strategic tool in holding back Russian or Iranian expansion within the Middle East?

If the West staggers ISIS, but fails to kill it, how can it possibly function in a manner that could in any way serve as a bulwark against the Russians or the Iranians?

My suspicion is that the professor is being a tad too clever, but that is what he gets paid for... to think in original ways concerning difficult and important matters.

As an American, though - and as a Giant's fan - I would suggest that the professor's pitch is a bit off the plate.
Posted by Mike L. at 10:13 AM