{Also published at the Elder of Ziyon, Jews Down Under and The Jewish Press.} 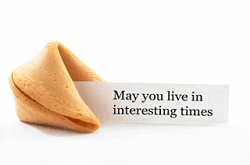 The Jewish political community is divided and distressed.

As I write, Israel is reeling over the Azaria case, the United Nations is pushing all-in on Jew Hatred, Jihadism is on the rise in Europe, white nationalism and anti-white racism are both on the rise in the United States, Obama is hitting the road (or, at least, crossing the street), the Russians are unhappy and shaking their fists, and Donald Trump is eagerly chomping at the bit.

Anything can happen and nobody knows what will.

For example, will Trump move the US embassy to Jerusalem?

I hope that he does. In fact, I will be damn pissed-off if he doesn't. But if he does so in a timely manner it will demonstrate a clear change in direction concerning US policy on the Long War. Oslo was a disaster and the two-state solution is dead dead dead. Perhaps Trump will recognize this and, if he does, it means pretty much everything is up for grabs. Will Israel seize the day and annex? And if so, annex what exactly? And how will "the world" respond?

Or will Israel, as is my bet, simply react to circumstances as they develop while wobbling back-and-forth on what to do with Judea and Samaria? No matter what it does, however, interested parties throughout the world are gearing up to give Israel a good ass-kicking if they can. Prior to the recent American election all the elements lined up with the EU, the UN, the Obama administration, the progressive-left - not to mention almost the entire Arab and Muslim worlds - in agreement that Jews have no rights to sovereignty on ancestral Jewish land.

While the ascendancy of Trump represents a giant question mark, Israel definitely dodged a bullet with Hillary. Unless, of course, you think that another four to eight years of degrading Israel in order to pressure it into complying with the demands of its enemies would have been a good thing. Now, at least, there is the possibility that the United States will go back to a more sensible foreign policy which honors allies while confronting enemies. We shall see.

We're waiting with bated breath on that one, aren't we? Speaking for myself, I am very much looking forward to the Democrats handing the DNC Chair to Keith Ellison. I hope that they do it because Ellison is a fair representation of the party as it stands now. He covers enough of the bases, from issues of diversity to those of progressive economics, to make most Democrats happy.

Of course, there is that niggling little problem with his anti-Semitic anti-Zionism which the rest of them studiously ignore - and make no mistake, all anti-Zionism is by definition anti-Semitic - but if you don't like it you can lump it. That's the attitude of the party, but I consider this a good thing because this way everyone knows where everyone stands.

Everyone sees what's on the end of every fork.

And will Alan Dershowitz actually leave the Democratic Party???

Yes, the earth will tremble and Balrogs will arise from the Deep.

It's my bet that Dershowitz will leave the Democratic Party in his life no sooner than did Ed Koch in his.

Nonetheless, for the first time we are seeing significant numbers of Jewish Democrats acknowledging something that has been clear to many of us for a very long time. The Democratic Party is shaking off support for Israel because it tends to view Israel through an anti-imperialist lens and because Muslims are a more important constituency in the long run for the party. In terms both broad and crude, this is what it comes down to.

We can acknowledge this truth or pretend otherwise, but truth it remains.

Meanwhile the American Jewish community, if not the diaspora Jewish community, more generally, is cracking along various ideological fault-lines. Tensions are mounting between "progressive" and Democratic Party Jews versus conservative and Republican Party Jews over U.S.-Israeli policy. Fault lines are continuing to crack between Israeli Jews and American Jews over the same question. And even within Democratic Party ranks, Jews are squabbling among themselves over the direction of the party and whether or not to split from the Democrats, as I did maybe 5 years ago.

This is not new, it is just getting more and more vital and intense.

Political sands have been shifting for many years but this moment is a true transitional moment. For Jewish people the election of Trump, whatever else it may mean, staggered the Oslo-Clinton-Obama anti-Israel status quo. Thus I find myself among those who sense opportunity in the moment.

While diaspora Jews are in no position to tell our brothers and sisters in Israel what to do, there is no reason why we should shy away from making suggestions. My suggestion, modest or not, is that Israel take the opportunity to declare its final borders. What those borders will be should entirely be up to Israel. A few years ago I would have suggested that they be determined through negotiations with Palestinian-Arab representatives. However, since at this point it could not be more clear that there is no Arab intention of creating a Palestinian-Arab state in peace next to Israel they forfeit any consideration.