I Was Wrong about Anti-Zionists

Michael Lumish
This is a retread of a thing I wrote for Daily Kos in June of 2009 under the nom de blog "Karmafish" which I entitled, I Was Wrong about Anti-Zionists.
It has been almost ten years, now, and what I was trying to do then was simply alert the American-Left to the fact of antisemitic anti-Zionism within their ranks.
The piece is sarcastic and ironic because I was frustrated at the failure of their ongoing refusal to recognize what was right before their faces.

In truth, the western-left does not care about racism. It is, in fact, the most highly racist movement outside of political Islam in the West today.

It simply uses racism as a political club.

And the thing of it is, these people are not being disingenuous. They sincerely believe what they say that they believe. What they do not seem to understand is that bigotry is not dependent upon the ethnicity of the target.
--
For a long time, now, I have been suggesting that left anti-Zionism often serves as a shroud for anti-Semitism and that the constant vilification and demonization of Israel is anti-Semitic when the people doing that vilifying ignore Darfur and Congo and Sri Lanka and the Chinese in Tibet.
I must admit that I was wrong and I hereby issue an apology.
I live in San Francisco and I love my town.  Some months ago there was a protest against Israel’s Gaza incursion and here are a few photos demonstrating just how wrong I was.
Let’s get directly to the matter, shall we?
This nice lady carried a sign reading, "Jews are terroist!"  I am not certain what a "terroist" is, but criticism of Israel is not, I repeat, NOT anti-Semitism.  By the way, aren't her daughters as cute as little anti-Zionist buttons?

Now, given the overly extreme sensitivities of
"Zionists" you would think that someone carrying such a sign would be asked to leave or put it away.  Did that happen?  Not exactly. 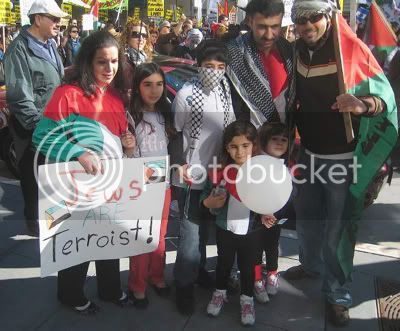 Smile pretty for the camera!
Some of the pro-Israel, "Zionist" crowd has suggested that the left is often supportive of Hamas despite their Jew Killing agenda as laid out in their charter, which reads, in part:

The time will not come until Muslims will fight the Jews (and kill them); until the Jews hide behind rocks and trees, which will cry: O Muslim! there is a Jew hiding behind me, come on and kill him!

But this is clearly false.  No one on the left actually supports Hamas:

No one on the left would be caught dead supporting a blood-thirsty, gay-hating, woman-oppressing, Jew-killing, theocratic organization like Hamas.  It’s just that Hamas is misunderstood.  They can’t help themselves.  Besides, it’s all Israel’s fault.
And since it is all Israel’s fault, you really cannot blame people for wanting to kill "Zionists."

Or ZioNazis, anyway.  This fine gentleman of the left has nothing against Jews, just evil ZioNazis who are legitimate military targets.  Kill the ZioNazis!  Of course, since the vast majority of Jewish people happen to favor the existence of the Jewish state (for some dumb reason) this would make them Zionists and, thus, Nazis.  And we all know what to do with Nazis.  Just what this gentleman suggests, eh?  But no reasonable person could possibly consider such a stance, the killing of "Zionists," to be anti-Semitic.  This is merely criticism of Israel and again, criticism of Israel is NOT anti-Semitic and anyone who suggests otherwise is a GIYUS Hasbara troll trying to shut down the discussion.
Here is this man’s criticism of Israel:

Smash the Jewish state?  That’s a good question.  Should Israel, or should Israel not, be destroyed?  There is something like 13 million Jews in the world, a whopping .2% of the world population, and nearly 40% of them live in Israel.  But the question of whether or not to wipe them out is not anti-Jewish.  It is a merely a question that people of good will can disagree upon.
Now, the European Union has declared that equating Israel with Nazi Germany is anti-Semitic, but given Europe’s famous love for the Jewish people, it is not surprising that they would suggest this.  The problem is that there is just too much good will toward Jews in Europe and they are far, far too overprotective of their Jewish citizenry.  Just because Jewish schools and synagogues have to be guarded by the police from possible attack means nothing.

And just because anti-Jewish violence is rising there is no cause for concern.  National Socialism, of course, is generally considered the worst, the most vicious, political movement in world history and they had to be destroyed.  But comparing Israel to Nazi Germany is not anti-Semitic.  It is, again, merely criticism of Israel.  There is nothing wrong with criticizing Israel, just as there is nothing wrong with criticizing any other country.  And just because Israel is like Nazi Germany, and Nazi Germany had to be destroyed, Jewish people should not get so head-up about this mild criticism.

And just because Zionism, the movement for Jewish self-determination and self-defense, is just like Nazism is also no reason for Jews to object to such a characterization.

Of course, some people consider Jews to actually be worse than Nazis.  The picture below shows a Star of David, the symbol of the Jewish people, with a "greater than" symbol pointing to a Nazi Swastika.  I understand that a tiny percentage of blood-thirsty Jewish neo-cons would object to such a characterization, but the neo-cons gave us the Iraq war and thus should not be listened to.  The suggestion that Jewish people are actually worse than Nazis is nothing but criticism of Israel.  It is not meant to offend Jews and it certainly should not be taken to mean that Jews are evil and must be gotten rid of.

Never again?  It's a question, really.  Probably never again.  Perhaps.
Nonetheless, as I am sure you will all agree, the Intifada needs to be globablized.

All this person is suggesting is that people of good will around the globe must take to the streets in violent confrontation with "Zionists" wherever they might be found.  Just because the vast majority of Jews support the Jewish state and are, thus, "Zionists" doesn’t mean that they should object to a global Intifada.
In fact, Jewish people, as a matter of social justice, should join with their anti-Zionist brothers and sisters calling for violent reprisals against... "Zionists"!
Some of you, btw, may have heard of a recent police shooting of an unarmed man in Oakland in the Oakland City BART station.  One liberal anti-Zionist protester, reasonably enough, blames this on the Jews.