The Age of Virtue Rage (Or, How to Reinvigorate Nazism) 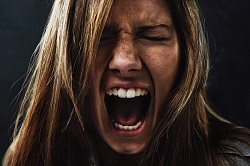 The early part of the twenty-first century in the United States might be considered the Age of Virtue Rage. Never before in the history of this country have so many people come together in honor of hatred and self-righteous indignation for so little reason.

I did not vote for President Donald Trump, nor did I advocate for him, and yet these boring-as-hell monkey-like group-thinkers scream from the hillsides -- day and night and night and day -- about what a terrible person this guy is. It is fairly amazing, actually, because the two biggest gripes against this president are that he is allegedly racist and sexist. The burning, unquenchable hatred for Trump is grounded in these twin notions.

And, yet, the Hate Lovers enjoyed Bill Clinton. I voted for Bill Clinton twice. He also, by today's standards, committed either rape or something akin to rape, in the White House.

And, for some reason, no one seems to mind.

{It is the hypocrisy that kills.}

And, please let us not forget that Barack Obama is a stone-cold racist. Obama honestly believed that he had every right to tell Jewish people where we may, or may not, be allowed to live within the very land of our own ancestry. It does not get much more racist than that. Some people will say that former President Obama merely wanted to bring about a compromise between the Arab-Palestinians who want to murder Jews and the Jews who disagree with that proposition.

And neither side was willing to compromise.

What I say is that the American-Left and the Democratic Party is riddled with racial hypocrisy.

The rage in American hearts, today, looks like nothing so much as the USA during the very peak of the Vietnam War in 1968, by which time tens of thousands of young American men had died in combat. The passion and the screaming from the heart and the Antifa violence in the streets in places like Berkeley are very reminiscent of 1968. Of course, in 1968, aside from the War in Vietnam, there was outright sexism toward women and the Klan was still on the march.

So sorry, but the bad old days are gone.

The current hysteria around White Supremacism and the Klan and the Nazis and this recent thing dubbed the "alt-right" is largely bullshit in the service of progressive-left political purposes. And the thing of it is, this is not to doubt the sincerity of these women, including those of the male variety, pissing their panties. I have no doubt that they actually do fear, on some vague level, the rise of the Old Right. But even if that fear is real it is merely a self-serving, self-righteous, political "red herring" because Americans despise right-wing Nazis and those of such an ilk.

The American Racist Right has no political presence.

The National Socialists have virtually no street presence and have not dusted off their black boots in over half a century.

They will not be real until such a time as we manufacture enough of them to make them real so that we can have something to push against for social-psychological reasons.

But if you want Nazis, here is how to create them.

Keep screaming at "white" people -- whoever exactly you take them to be -- and see how the young men eventually react.

I guarantee you this, however, if you want Nazis for psychological and reasons of political power badly enough, they will arrive.