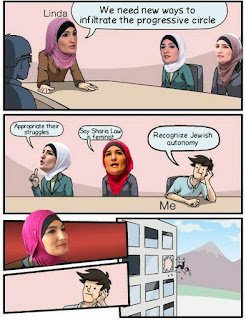 But what has happened often from White Jews when they call you call an antisemite, is they look at Muslim women from an orientalist trope, that we are inherently antisemitic because we are Muslims, right?
"It's a stereotype that has been used often against the Muslim community. That we are antisemitic until proven otherwise. That we are guilty until proven innocent. It's not okay."
"She didn't know nothing in Somalia, about no antisemitism. This is something she is learning along the way now that she is a legislator

Where to begin? White Jews. Two of the most hated groups among leftists and Muslims like Sarsour and Omar evidently. The inclusion of the word white is an attempt I suppose to do the old good Jew Bad Jew thing; a common anti-semitic trope. This is also an attempt, like all the rants these bigots give, to mainstream antisemitic tropes.

Orientalist? Well, this is a reference to failed Jew hater and PLO member Edward Said's definition of "a way of seeing that imagines, emphasizes, exaggerates and distorts differences of Arab peoples and cultures as compared to that of Europe and the U.S. It often involves seeing Arab culture as exotic, backward, uncivilized, and at times dangerous" Exotic? Eye of the beholder. Backward, uncivilized, and at times dangerous? Well, look at what they do and say. Geeze, a whole Arab inspired Muslim  nation, Brunei has progressed so much it is now stoning gays in 2019. If that ain't backward, uncivilized and dangerous, I don;t know what is.

Ignorance because she is from Somalia? Give me a break. Omar was brought up to hate Jews in Somalia and Islam. Duh. Sarsour was born and raised in America. She should know better than to be an antisemite but she is the daughter of Palestinian immigrants so she has a Jew hating pedigree.

The thing about all these so called Pro-Palestinians is that they don't understand that supporting peace is a far better strategy to make things better than advocating the end of Israel, Jew hate and all the other hate they promote and use to spur on violence between Palestinians and Israelis and hatred and violence among other groups they hate: non-Muslims, whites, the police, etc. It's no wonder "sour," is part of her surname.