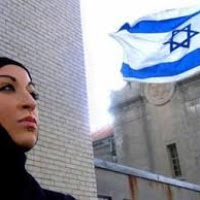 Sad piano music. Mangy dogs in cages headed off to dog Treblinka. Glassy eyed kids with flies on their faces waiting to starve to death. Sarah McLaughlin. That guy who looks like Santa Claus for the Christian Children’s fund. You can help. Only you can help. I can never remember who costs more to save; pit bulls or "Palestinians" or Sudanese children. For less than the price of a Starbucks either way.

“Israeli Apartheid Week” has come and gone with what I gather was less noise than prior years. I don’t pay much attention to it because it’s the angrier version of PETA demanding people die for the sake of no animal testing (excepting of course the drugs that keep animal rights activists alive which were developed with animal testing). And in some ways they share some of the same values. Pick a cause and kill everyone on the other side of the issue. Because it’s easy to be self righteous and badly informed. Yes yes, it’s ‘apartheid’ to people who don’t know what that is. No more animal testing, mind you they don’t make a distinction between cancer drugs and cosmetics. Pick an ogre and hate it. And by all means when you boycott things pay no attention to your own hypocrisy. Ban animal testing as you inject yourself with insulin developed by animal testing. Tweet for the destruction of all Jews using your Israeli technology.

There’s an old joke from the Soviet Union. The CIA, the FBI, and the KGB all have a competition to see who’s the best at finding a target and retrieving it. They decide they’ll release a rabbit in the forest and whomever finds the rabbit first wins. The CIA goes first and after 24 hrs of satellite imagery, chemical analysis of the soil and waterboarding a park ranger they determine the rabbit does not exist. The FBI goes next and after 2 hrs a tactical team accidentally starts a forest fire and in the ensuing gun battle the rabbit is killed. The KGB heads off into the woods and 20 minutes later they come back with a dazed, beaten and bloody hiker who announces “I am a rabbit, my parents were rabbits”.

Israelis and Jews in general long ago passed into Soviet rabbit status. We are what our persecutors say we are. In fact a fairly good working definition of what anti-Semitism is, is a kind of burning hatred that supersedes reality or common sense.  That which survives logic, fact, truth or even the negation of all of those. We control all governments, who are all against us. We control all media which spends nearly its entire output condemning us.  We control all banks and yet need to suck the blood of everyone everywhere because we’re broke.  We’re at the heart of a 2,000 year massive global conspiracy that is so impenetrable, so dark, so secret that literally everyone on the planet knows about it.

“Israeli Apartheid Week” is an annual exercise in turning black into white. Jews are portrayed as illegal alien European invaders though more than half of all Israelis are the refugees of nearly 1 million Maghreb and Mizrahi Jews marched out of their own homes at gunpoint. Portrayed as an ‘apartheid nation’ where approximately infinity percent more Arabs, Muslims, Christians and any other non Jews are free to live however they wish compared to the Arab nations and how they treat non-Muslims. In fact were you to go to Iran or Libya you’d witness INTRAIslamic racism and persecution where Bedouins and Azeris are made into second class people.  And then to complete the fun-house picture the LGBTQ community jumps in to scream about….well no one really knows. They can’t say Israel treats their own LGBTQ unfairly. So they simply huff and puff and scream and whine that somehow those dastardly Jews need to be more like Hamas or Iran. Iran executed hundreds of gays in the past 12 months for the crime of being gay.  Add in another few hundred for the crime of being raped.

These are countries that still happily practice chattel slavery. Breathe that in. College students are marching around screaming about how the problem with Jews is that either they don’t die or they don’t practice slavery.  Meanwhile Syria is putting up near genocide numbers with about 200,000 dead, 4 million refugees.  Thousands of ‘Palestinians’ dead. Hundreds starved to death.

Fair enough. I don’t expect anyone to pay attention to arguments like that. There’s no point in pointing out such and such is a thousand or 10 thousand times worse.    Because we are the rabbits and the 'Palestinians' are puppies that have to be saved for the price of a donut. You don’t hate puppies, do you? You wouldn’t begrudge a dying child a donut, would you?

You’d be arguing with people who say a 17 year old with an assault rifle or a bomb vest is a ‘child’ in the same breath they scold you for protesting that some Arab country wants to lower the age of ‘consent’ to 10, or 9 or 6. Which apparently they wouldn’t have to do if Israel no longer existed.  And that is silly and pointless.  My dog responds to certain words and the tone of my voice. He doesn’t understand what I’m actually saying. And I did rescue him from dog Treblinka so should I anthropomorphize him and worry about his ingratitude?  Likewise there’s no reason to assume that Israel haters can even gain the capacity to understand. Why should they?  We’re rabbits, we've always been rabbits.

I was following, for a while this dust up about one or two Hillel organizations that decided amongst themselves that they couldn’t remain neutral on the point. So given the option between a mediocre ersatz Zionism and throwing open the doors to every crackpot loon who once dated a Marxist fascist ‘Palestinian’ they decided to go that way and embrace what they delude themselves is the agora of ideas.

Why is this silly fairness seemingly hardwired into American Jews? Why is that definition of ‘fair’ so warped? When did entertaining murderous psychopaths equate with ‘balance’.  What kind of ideas are worth buying and selling in this agora? Should we demand HBC’s (historically black colleges) welcome the Klan? Do we really need to hear what rapists and pedophiles have to say in the context of women and children’s rights? And yet Ramaz Orthodox High School in NY welcomes Rashid Kalidi to speak about how he hopes to see the extinction of Israel soon. Somehow in Starving Sudan Baby-world Jews’ own tikkun olam mutates into something horribly obscene.  All you have to do is welcome bigots into your tent. And it’s a mystery until you realize that some of the strongest adherents to anti-Semitic tropes are Jews themselves. Apparently we Jews have so much to spare we can easily afford being attacked by racists in our own home. Which is buying into the Jew hater’s lie of inscrutable Jewish power.  Because they’ve moved into the world of Soviet Rabbits. If your tormentor wants to come to your home to lecture you on how much your not being dead offends him, he must be partially right to get that worked up over it.

This is the agora of ideas we inculcate upon our young adults, where even the term “Orwellian” seems trite.
Posted by Empress Trudy at 9:34 AM