As Sharia as Apple Pie

{Also published at the Elder of Ziyon, Jews Down Under and The Jewish Press.}

Future historians may find the recent "Women's March" interesting for a number of reasons. One of those reasons is that it nicely illustrates the tensions between the ideals of multiculturalism and universal human rights within contemporary western-left ideology.

Whatever else the march may have accomplished, however, it definitely propelled Linda Sarsour into the political night sky.

While she has a fascinating resume, the problem is that Sharia is a Muslim Supremacist judicial system and is, therefore, fundamentally incompatible with the Constitution of the United States.

It is out of this tension within the Left that the central ideals of multiculturalism (as represented by mass Muslim immigration into the West) and universal human rights (as represented by the right of women not to be stoned to death for the crime of being raped) are locked in a largely unspoken death-struggle for the soul of the Democratic Party and the progressive-movement.

The resolution of this contradiction between Islam and western political values will loom large in determining the lives of coming generations.

The Progressive-Left and the Multicultural Dilemma

It was out of the multicultural ideal that Angela Merkel and the European Union opened the doors of Western Europe to mass Muslim immigration in what is perhaps the most audacious social experiment in world history.

Much like the unwarranted optimism by westerners concerning the "Arab Spring" before it, many Europeans looked forward to the cultural enrichment of Europe by Muslims from the Middle East and North Africa. The horror of the Syrian civil war strained the heart-muscles of many westerners who wished to help a population devastated by widespread violence and civil strife. Meanwhile western politicians promoted the idea that Europe needed an influx of young workers for economic reasons, anyway.

In the progressive-left imagination, however, this multicultural ideal slips at the thought of Muslim rape gangs in Britain and the horrendous treatment of women under Sharia Law.

It staggers upon recognition that Islam, whatever else it may be, is a theological-political philosophy that, from the time of Muhammad until today, seeks to expand its territorial boundaries with no interest whatsoever in women's rights.

It should also be noted that beyond the liberal West (with the funny exception of Antarctica) there were no women's marches anywhere. There was a considerable dearth of women marching in Riyadh and Teheran and Mogadishu.

For some reason the women of the Middle East did not care to join their western counterparts in women's solidarity.

There were no pink "pussy hats" in the streets of Karbala or Kandahar or Ramallah.

Nonetheless, one can easily imagine how the authorities in those places would have reacted had there been... or is that a racist assumption?

Meanwhile, American Jewry is going through a dark night of the soul as it awakens to the fact that not only are progressives and Democrats increasingly hostile toward Israel, with only 33 percent of Democrats supportive of the Jewish state, but that they could not care less that young Islamists are driving Jews out of Europe.

Western Jews and the Multicultural Dilemma

If the Obama administration has taught Jews anything it is that the progressive-left and the Democratic Party have considerable empathy for Islamists. The source of that empathy is what philosopher Pascal Bruckner referred to as The Tyranny of Guilt. It is the growing sense - refined and promoted at the universities and within progressive-left circles - that Europeans owe a blood-debt to the rest of the world.

Related to this notion is the idea that the ongoing Arab-Muslim war against the Jews of the Middle East is a righteous struggle against western imperialism.

The slowly-dawning realization among progressive-left Jewry that their own political movement has turned against them is causing consternation and conflict within the community.

The Women's March froze out many progressive-left Jewish women because Linda Sarsour is a pro-Sharia anti-Zionist and the poster above reflects that. The chilling message is that Sharia, as represented by the hijab, is "as American as apple pie" and only feared by hard-right, racist, sexist "deplorables" of the sort despised by Hillary Clinton and that voted for Donald Trump. The flag as a hijab is meant to emphasize the compatibility of Sharia with American sensibilities, as the bright red lipstick suggests a nod toward western sexual-aesthetic mores. 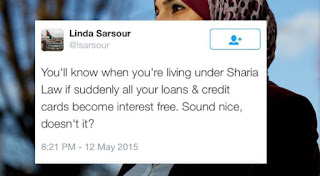 While Sarsour claimed to stand for freedom at both Standing Rock and the post-inaugural streets of Washington D.C., and is unquestionably receiving more attention now than at any time in her White House-visiting past, she also argues that Sharia Law is a good thing that "We The People" should embrace.

Who, outside of bankers, wouldn't want to see interest free loans and credit cards? Of course, she fails to reference the little Koranic details, such as the practice of public head-chopping, that remains so popular throughout much of the Islamic world.

The core of Sharia, beyond its generous money-lending practices and public brutality, is second and third-class non-citizenship for dhimmis within an Islamic theocracy. Of course, "protected" or dhimmi status is offered only to "people of the book" which includes Jews, Christians, and Zoroastrians.

Everyone else caught within traditional Sharia-dominated societies received the choice of enslavement or death.

The highly-respected and recently deceased Professor Martin Gilbert reminds us that for Jews and Christians under Sharia in the Middle East:


There could be no building of new synagogues or churches.  Dhimmis could not ride horses, but only donkeys; they could not use saddles, but only ride sidesaddle.  Further, they could not employ a Muslim. Jews and Christians alike had to wear special hats, cloaks and shoes to mark them out from Muslims.  They were even obliged to carry signs on their clothing or to wear types and colors of clothing that would indicate they were not Muslims, while at the same time avoid clothing that had any association with Mohammed and Islam. Most notably, green clothing was forbidden...

Other aspects of dhimmi existence were that Jews - and also Christians - were not to be given Muslim names, were not to prevent anyone from converting to Islam, and were not to be allowed tombs that were higher than those of Muslims.  Men could enter public bathhouses only when they wore a special sign around their neck distinguishing them from Muslims, while women could not bathe with Muslim women and had to use separate bathhouses instead.  Sexual relations with a Muslim woman were forbidden, as was cursing the Prophet in public - an offense punishable by death.

Under dhimmi rules as they evolved, neither Jews nor Christians could carry guns, build new places of worship or repair old ones without permission,or build any place of worship that was higher than a mosque.  A non-Muslim could not inherit anything from a Muslim.  A non-Muslim man could not marry a Muslim woman, although a Muslim man could marry a Christian or a Jewish woman. 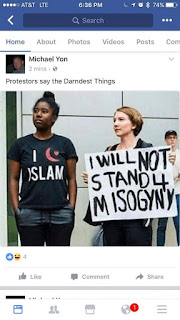 The western-left, including the Democratic party, desperately wants to see a harmonious integration of Muslims from the Middle East and Africa into North America, Europe, and Australia.

They do so out of a moral imperative grounded in multiculturalism and universal human rights.

Thus pro-Israel Jewish progressives throughout the western world look at one another with their palms in the air saying, "What the hell do we do now?"

Yet, at the same time progressives look upon the children and grandchildren of Holocaust survivors as something akin to Nazis if we don't do backflips at the thought of a mass Arab-Muslim influx into the United States.

Left, right, or center, the western Jewish community does not care about the skin color of immigrants.

We do not care about what particular patch of Earth that they happen to come from.

What we do care about is the transmission of Koranically-based hatred for the infidel onto the lands of our families because we've been down this road before.

If this makes us racist then it is equivalent to Jewish "racism" toward Nazis during World War II.

The problem is Islam in its political aspect and that is precisely what the Left cannot bring itself to face.
Posted by Mike L. at 8:03 PM