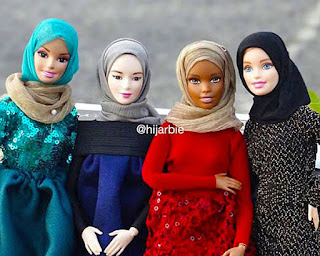 There is a lot of recent hoopla concerning the Hijab Barbie.

I honestly do not know what to make of it beyond the fact that Mattel wants Muslim customers for their Barbie collection.

Many would argue - and I definitely agree - that the hijab is a symbol of women's submission to men, particularly within an Arab-Muslim context, and is, therefore, an anti-feminist, anti-liberal, anti-progressive, symbol of injustice.

Others would argue it is simply about accepting ethnic diversity.

Still, others would suggest that it is a matter of creeping jihadism. The argument here would be that the purpose of jihad, including the non-violent kind, is the advancement of Sharia Law and that the hijab is a symbol of precisely that.

This is something that should be taken into consideration.

But, the truth is, Barbie is Jewish!

{She is still allowed Muslim friends, tho.}

Peter Coyote lays it out.