Milo Yiannopoulos on Nothing Left Live

{Also published by Jews Down Under.} 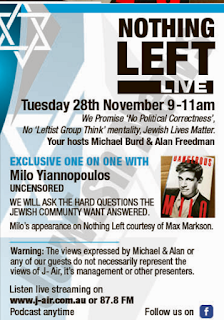 Michael Burd and Alan Freedman of Nothing Left on Australia's J-AIR radio conducted an interview with Milo Yiannopoulos to be aired on Tuesday, November 28, 9 to 11 AM, Melbourne time.

Yiannopoulos is one of the more notorious figures emerging out of the previous presidential election in the United States.

The guy is a British, Gay, conservative, secular Jew who will kick your rhetorical ass in a New York minute.

The reason that I like Milo is because he is brave.

The reason that many in the Jewish community despise Milo is because they think he is a degenerate.

So, good for Burd and Freedman for having the guts to bring him on.

The thing is, Nothing Left attracts top names from Dershowitz on down.

I am biased because I occasionally drop in to say hello, but the fact of the matter is that they also speak with Isi Liebler, Caroline Glick, Tuvia Tenenbom, Brigette Gabriel, Matthias Küntzel, Jonathan Tobin, Diane Bederman, Ted Belman, Gregg Roman, Dan Shapiro, Martin Sherman, and Avi Abelow.

And that is just since August of this year.

Anybody who knows anything about the Arab-Jewish conflict knows most of those names.

But Yiannopoulos is in a category unto himself.

Some refer to him as "alt-right," but, in truth, he is probably something closer to a "classical liberal"... perhaps bordering on economic libertarian.

He drives some people batty because they cannot stick him into pre-ordained slots within the identity politics Hierarchy of Victimhood.

He represents one example of how the term "alt-right" was (and is) used as a smear against people who having nothing whatsoever to do with "white nationalism" or "white supremacy" or the Klan or Nazis or anything even close to such nonsense.

The term "alt-right" is generally understood to mean "white nationalist."

It was coined by actual white-nationalist-nobody Richard Spencer who came to fame because the Clinton campaign needed a specimen who Hillary could smother in her "Basket of Deplorables."

Milo Yiannopoulos, however, is an openly Gay, half-Jewish Brit and a former editor for Breitbart - which is also an example of a venue that came into fame in the months leading to the astonishing triumph of Donald Trump to the Presidency of the United States. In truth, the best thing ever to happen to Breitbart and Bannon and the fellahs over there was the Hillary campaign.

Were it not for Hillary - or such is my claim - virtually no one would ever have heard of the "alt-right."

One thing that it is interesting to note is that Yiannopoulos and everyone's favorite antisemitic anti-Zionist, Linda Sarsour, came to widespread public notice during the same political moment.

They are both charismatic figures who carry their ends of the political zeitgeist.

The difference is that Linda is still enjoying her "fifteen minutes."