{Also published at the Elder of Ziyon, Jews Down Under and Vlaamse Vrienden van Israël.}

"We say to him [Netanyahu], when he claims that they [Jews] have a historical right dating back to 3000 years B.C.E.—we say that the nation of Palestine upon the land of Canaan had a 7,000-year history B.C.E. This is the truth, which must be understood, and we have to note it, in order to say: 'Netanyahu, you are incidental in history. We are the people of history. We are the owners of history.'" - Mahmoud Abbas, May 14, 2011.

He is, of course, correct and the very fact that he feels it necessary to remind us is because many Palestinian-Arabs do make ridiculous claims such as that "Jesus was the first Palestinian shaheed" and do so as part of the larger project of heritage theft against the Jewish people.

They also do so out of a not unjustified assumption concerning the idiocy and ideological blinkertude of the humanitarian racist West that enjoys blaming Jewish people for the violence against us.

This is no small matter, but it is the kind of thing that travels beneath the awareness of typical mainstream reporters.

Those who are less familiar with the Long Arab / Muslim War against the Jews of the Middle East than is Behan might wonder why he feels it necessary to acknowledge the obvious? The reason that he does so is because the war against the Jews is as much a propaganda campaign - a campaign for delegitimization - as it is a campaign of violence, terrorism, and physical intimidation for the purpose of driving Jews back into diaspora and, thus, helplessness.

The Phases of the Long Arab / Muslim War against the Jews include:

When Palestinian-Arabs claim the Jewish historical figure of Jesus as a "Muslim martyr" they are engaged in the process of heritage theft.

The purpose of this cultural thievery is to displace the indigenous Jewish population with Arab colonists, both physically and culturally and to do so as a matter of self-righteous "social justice."

This is the insidious irony of the entire project. They are seeking to turn Palestinian-Arabs into the New Jews while transforming the Jewish people into the New Nazis. But most importantly it is to sew confusion in the minds of interested and well-meaning outsiders.

Parisian intellectuals, for example, have about as much collective knowledge of the Long Arab / Muslim War against the Jews as I have about Parisian intellectuals. That is, although such people have no idea about the conflict they are constantly encouraged to view it as one between a racist, colonialist, imperialist, apartheid, Jewish, war-machine versus a small, bunny-like, native population that wants nothing more than to be left in peace to tend their sacred olive groves.

The enemies of the Jewish people, throughout the Middle East and Europe, therefore fabricated the propagandistic illusion that the Jews are interlopers on historically Jewish land while the Arab colonists are the persecuted indigenous population.

Heritage theft is part of this process.

Although transforming the historical figure of Jesus into a Palestinian-Arab is probably the most ridiculous and audacious of such examples, it is certainly not the only one. 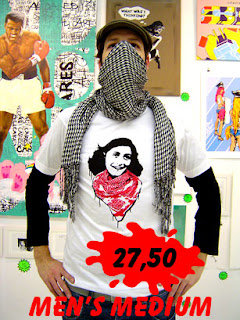 After all, if the Arabs can abscond with Jesus they can certainly take Anne Frank which is why we sometimes see her in a keffiyeh within circles associated with antisemitic anti-Zionism.

Another obvious example, as Behan points out, is the obscuring of Jewish history on Jewish land through the widely accepted usage of "West Bank" for Judea and Samaria. The truth is that the tiny bit of land along the eastern Mediterranean was known as Judea and Samaria for millennia.


Judaea is the Roman/Latin cognate of Judah, which is itself the Anglicized version of the Hebrew name for the land: ‘Yehudah’. We are called Jews/Yehudim because we come from Judea/Judah. The languages spoken there – Hebrew and Aramaic – formed part of the basis for diaspora tongues such as Yiddish.

Yet another example - one that I find particularly toxic and obnoxious - is the effort to equate the "Nakba" with the Holocaust.

As Bashir Bashir, professor of Political Science at Hebrew University of Jerusalem and co-editor, along with Amos Goldberg of The Holocaust and the Nakba: Memory, National Identity and Jewish-Arab Partnership tells us concerning their edited volume:


Zionism tries to treat the Holocaust as both universal and particular: it is supposed to be significance to all of humanity, but it is also the patrimony of Zionism, which has the right to decide how it is invoked and understood. Putting the Holocaust and the Nakba together in a common frame disrupts this exceptionalism and is meant to provoke new thinking that exceeds the rigid, dichotomous, and oppositional boundaries of ethno-nationalism.

To be clear, neither Bashir, nor Goldberg, seek equivalence between the slaughter of the millions of Jews in Europe and the fact that some Arabs fled Israel, and some were driven from Israel, after launching a war against the Jews in November of 1947.

But, nonetheless, they are walking an exceedingly tight rope and it is not the least bit obvious that "putting the Holocaust and the Nakba together in a common frame" does anything other than draw an ethical equivalence, despite their suggestions otherwise.

What Dani Ishai Behan very well understands, but what most observers of the conflict do not, is that there is not the slightest ethical correspondence between the Nazi slaughter of the Jews in Europe and the efforts among Jewish Holocaust survivors to save themselves and their families from the Long Arab / Muslim War that well preceded the existence of Nazis and that continues to this day.

Following the death of Muhammad in the seventh-century, the Muslims of the Arabian Peninsula conquered the Byzantine Empire and almost went forward to conquer the entirety of Europe.

I am afraid that in doing so they do not also get to conquer either Jewish or Christian history.

Jesus was a Jew and everyone knows it.

When Palestinian-Arabs claim otherwise they make themselves look like fools.
Posted by Mike L. at 8:29 AM