The Unbearable "Whiteness" of Linda Sarsour 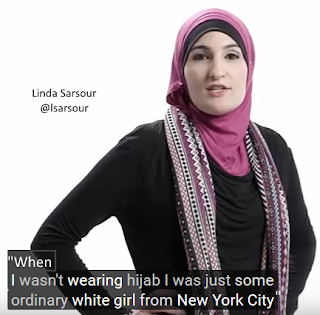 This is not her fault, obviously, but for a person who describes herself as a "woman of color," Linda Sarsour is the whitest person that I have ever seen.

I am sure that it is terrible and racist and sexist and homophobic and ageist and Rastaphobic and transphobic and antisemitic for me to mention this -- and whatever else makes you happy -- but I am pretty sure that Linda Sarsour is about as White as White can get.

She is Whitey McWhiterson. She is so white that whenever she pops up on my social network feeds I have to go get the Visine so that I am not blinded by the glare.

And whatever anyone else may make of this particularly racist idiot, the fact that as a white woman she pretends to be non-white for the purpose of railing against Euros and Jews is... odd. In fact, it is straight-up nonsense, but it serves a purpose, nonetheless.

Linda Sarsour reminds us that this whole biochromatic way of viewing American politics is not just nonsense, but highly toxic nonsense.

And it goes directly against the very foundation of the "progressive-left" view on ethnicity as described by Martin Luther King, Jr. in his famous "I Have a Dream" speech. I do not need to quote it directly because anyone likely to read this already knows the thesis. King's fundamental idea was to judge people as individuals, according to character, rather than as faceless examples of ethnic groups. It is not very complex. It means that when Linda Sarsour and her people shake their fists and scream that we must follow "women of color" it means that she and her people are throwing the legacy of Martin Luther King down the toilet, even as they claim to stand for that very legacy.

It is the hypocrisy that kills. 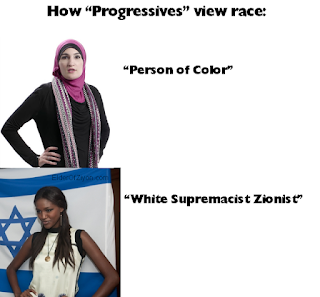