Someone in the House should speak on the floor regarding Ilhan Omar's proposed resolution supporting the BDS movement in front of a picture like the following. 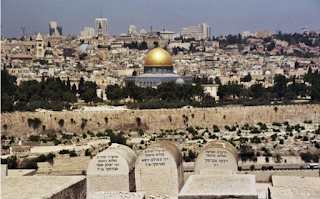 In front of that picture, he or she should say:

Here is a picture of the ancient Jewish cemetery on the Mount of Olives. Notice the tombstones in the picture. What do you think the purpose is of those tombstones?

Many of you hearing that question are probably asking why I bother to ask that question. You probably think it is obvious that their function is to mark who is buried in the cemetery and their exact burial location. However, not everyone agrees that it is so obvious. When Jordan occupied the territory between 1949 and 1967, the occupation authorities saw the tombstones as a resource to be harvested to pave their latrines.

So I ask the esteemed sponsor of the present resolution, is that what you believe the proper function is for these tombstones? Do you believe that they are meant for paving Arab latrines?