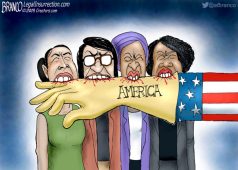 Last night at his rally in North Carolina, Trump's supporters spontaneously broke out in cries of "Send her back." at the mention of Ilhan Omar's name. This all comes, undoubtedly from Trump's previous tweet ASKING unnamed Congresswomen "Why don’t they go back and help fix the totally broken and crime infested places from which they came. Then come back and show us how it is done"

Naturally, he and his followers are labelled racists and xenophobes because these unnamed Congresswomen are Persons of Color. It has nothing to do with the fact they seem to hate almost everything about America; favor Communism/Socialism; want open borders; hate Israel and call ICE workers "concentration camp guards." Since I don't think Trump or most of his followers are white supremacists I suspect they are acting from the latter rather than the former rationale. But that doesn't fit the Left's anti-Trump narrative.

Now the sight of a bunch of mostly white people shouting "send her back," about a black woman could remind you of a Hitler rally.....if you were really dumb or really reaching. And you have the perfect right to think it and say it. Go ahead, say it loud and long. Make sure every American voter hears you say it. Paint swastikas on picture of him and his family and his supporters and post them everywhere. Do it all. He double dog dares you.

And should you lose in 2020, heaven forbid, blame everyone but yourselves cause YOU tried to stop Orange Hitler. You did your level best.
Posted by Doodad at 7:41 AM