To Mask or Not to Mask

Michael Lumish
One of the stranger things about this exceedingly strange and ugly moment in American history is the debate over masks. Some people believe that the insistence upon wearing the mask by politicians, the media, and much of the general public is an intrusion upon the civil liberties of the individual. They often see it as a manifestation of social conformity and group-think or what you might call Lemming Culture. They also tend to doubt the utility of such medical apparel to protect anyone from this virus.
The people who insist upon the mask are merely trying to do what little they can do to not spread the virus. They are hoping that our collective mask-wearing, and the related lock-down, will save lives.
I live in Oakland, California and what I see in my little neck of the universe is maybe about an 80 percent compliance rate on the main thoroughfares. For myself, I never wear my mask on the street, but always put it on when entering one of the few retail stores that remain open. I try to balance courtesy toward others with my own personal freedom as I see my friends lose jobs and the shuttering of once active restaurants and small retail stores.
One thing that has been obvious to me since early in the CV-19 crisis is that it has three fundamental aspects: the medical, the social, and the Constitutional. What bothers me is that while there is plenty of discussion around the medical side of the issue -- which is as it should be -- there is virtually zero discussion around the social side of the lockdown which would include increased poverty, increased unemployment, increased homelessness, increased domestic violence, increased divorce, increased suicide, increased homicides and increased crime.
The medical aspect of CV-19 is clearly important for the obvious reason that people's lives are directly at stake. I would suggest that the social aspect is probably at least as important, but it is rarely discussed. Often if you so much as raise questions from the social side you are met with a wall of resistance by people who assume that you are indifferent to the sickness and deaths of others.
In that joyous spirit, I want to offer four social consequences of mask-wearing. This is not to argue against the mask. It is merely to point out aspects that should be taken into consideration. These are:
1) It makes it much harder for the cops to do their jobs... which will make Antifa and Black Lives Matter happy.
2) It makes life much more difficult for the hearing impaired who generally use lip-reading as a sort-of back-up.
3) Common sense dictates that, combined with social distancing, it will teach children to be very wary of those around them. This will not have a beneficial effect on future generations.
4) It will warp the social aspect of the college experience.
My concern is that all of these hard and fast changes to American culture will disfigure it permanently.
We shall see.
By the way, this is my mask. It's meant to indicate my horror and disgust at this entire historical moment. 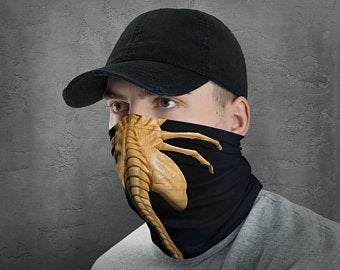