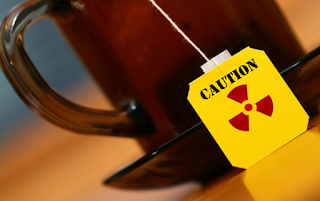 Taking a cue from Donald Trump, Lebanon has moved to secure its homeland from an invasion of refugee Israeli teabags.


No teabag for you: a supermarket in the Lebanese city of Sidon was discovered to have been selling a box of Lipton tea with the price written in shekels, instead of the local pound; several consumers were outraged; Economy Ministry sends inspectors to track down additional 'Zionist' tea bags....An attempt to figure out how the item arrived on a Lebanese shelf in the first place found that it was originally shipped from Egypt, and that the price in shekels was intended for the Arab Israeli market. The site called on "department stores in Sidon and the area to beware of products of this kind, so as not to become the victims of the mafias of the enemy's normalization." The site also called on Lebanese security and law forces to find out how such products manage to enter Lebanon.

In a local interview the teabags claimed they were just trying to find a good place to live and practice their culture without the fear of being in hot water all the time.