This is the most pathological moment in US political history since 1968.

I come out of the progressive-left, but the movement lost me when I started noticing Nazi Swastikas entwined with Stars of David at anti-war rallies in San Francisco.

It is suggesting common-cause with an anti-Zionist seeking to bring Sharia into the United States under the cover of feminism. (Of feminism, for chrissake.) This is not a criticism of Muslims as people, but it is very definitely a criticism of Sharia. Whatever else Sharia may be, it is a theological-political ideology and thus open to public scrutiny and criticism. This is particularly true when the head-chopping of non-submissive women or the throwing of Gay people off of rooftops is seen
as a moral imperative for so many within the Islamic faith. 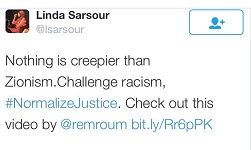 Jewish people need to draw the line at anti-Semitic anti-Zionism of the type represented by Sarsour who once twittered that "nothing is creepier than Zionism."

In the meantime the progressive-left, the Democratic Party, and Clinton Incorporated have turned Trump into the Devil, but what they fail to understand is that their intense and overblown hatred immunizes the guy from their own criticisms.

Whenever they lambaste Trump as a "fascist," or something akin to Hitler, he garners quiet sympathy while making his accusers look malicious, ignorant, and untrustworthy in their conclusions.

The intense hatred for Donald Trump is, in part, a result of the accelerating ideological drumbeat around issues of race, gender, and class as derived from the New Left and the Vietnam War. During the 1960s we saw the rise of Second Wave Feminism, the anti-war movement, Gay rights, environmentalism, Black Power, Brown Power and on and on. This churning political chaos blended progressive-left identity politics with socialism eventually resulting in the remarkable challenge by Bernie Sanders to Hillary Clinton for the Democratic Party presidential nomination in 2016.

There are, quite obviously, very good historical reasons for all of this. Does anyone really need reminding of how long women in the United States were non-citizens? Or how long black people were slaves? Thus, the New Left take-over of the universities was a response to centuries of unjust marginalization and displacement of the allegedly inferior other.

The problem is not that in speaking up for women, or in opposition to war, or in favor of minority rights, that the Left had nothing to say. They clearly had plenty to say. The problem is that they refused to acknowledge their winnings on the table.

That is, the less racist and sexist the West became in recent decades the harder and faster the drumbeat of race, gender, and class became, eventually emerging, during the Obama administration, as the high-pitched shrill of identity politics that we know today.

And that really is the saddest part.

The faltering liberal West represents the most socially just and welcoming form of political organization in human history, yet it is lambasted by a significant portion of its own citizenry as among the very worst.

Instead of joining with the white American middle-class for the purpose of moving forward in relative harmony, the progressive-left demonized those people, particularly the conservatives among them, as precisely what is wrong with the West today.

One Reason Why Hillary Got Beat

In the months leading into the 2016 presidential election the tempo of progressive-left accusations of racism, sexism, anti-Semitism, disaster capitalism, homophobia, Islamophobia, transphobia, xenophobia, and generalized badness, approached a crescendo.

One of my favorite examples was when transgender Inside Edition reporter Zoey Tur (née Robert Albert Tur) threatened violence against Brietbart-associated writer and radio talk show host, Ben Shapiro, because Ben referred to her as a "Sir" during a panel discussion on Caitlyn "Bruce" Jenner.

The rather burly Ms. Tur subsequently threatened Shapiro with a "curb stomping" which anyone who has ever seen the movie History X can tell you is a rather unpleasant form of getting one's ass kicked... if not, more likely, dead. Shortly thereafter Shapiro suggested that such brutality might be considered a tad "unladylike" thereby revealing that someone obviously needs to give him a good mansplaining.

Shortly after the election, the MTV "2017 Resolutions for White Guys" video nicely summed-up the progressive-left, politically-correct, coastal zeitgeist that nudged Trump into the winner's box.

While no one ever accused the people over at MTV of being big thinkers, the truth is that during the brief historical moment between World War II and the present the West actually made tremendous gains in social justice. Yet it is precisely at this moment that the cries of racism and sexism and fascism dramatically increased in direct proportion, ironically enough, to the diminishment of racism, sexism, and fascism.

Never before was a society so free and, yet, so despised by so many for its alleged lack of freedom. 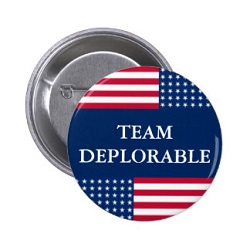 In retrospect, therefore, it is not particularly surprising that as the Clinton campaign conjured the "alt-right" as an object of hatred with which to smear Donald Trump that many less partisan Americans refused to buy into that hatred.

The more the Clintonistas pointed the trembling finger of accusation toward all those politically-incorrect heinous "deplorables" - otherwise known as their fellow Americans - the more those people either adopted that attribution as a badge of honor or dismissed the Left as a bunch of anti-white racist, anti-American hate-mongering nit-wits.

In other words, each time progressives spit the notion that Americans from places like Lexington, Kentucky or Provo, Utah or Ottumwa, Iowa were essentially a bunch of bigoted, heteronormative, neanderthal, pig farmers another Republican-operative angel received its wings.

By turning Donald Trump into "Genghis Hitler," as my friend Trudy put it, the Left leaves no room for negotiation, discussion, or even thought. By accusing Trump of anything and everything - up to and including "golden showers" in Russian luxury hotelrooms - it immunizes the guy from genuine criticisms.

It means that people who seek some reasonable objectivity in their understanding of what is actually happening must slog through an endless miasma of bullshit to get at a kernel of truth.

And what this means is that the kind of key honest criticisms that could sway the general American citizenry back toward a left-leaning direction are lost in the political swamp, thereby freeing president Trump to do damn near anything he wants. After all, if almost everyone left-of-center is willing to string the guy up for putting his shoes on in the wrong order, why should he not just go forward and do whatever he wants, anyway?

An important question is, will this hatred topple the guy or will it feed his strength?
Posted by Mike L. at 8:58 PM