Is Barack Mandela a Jew? 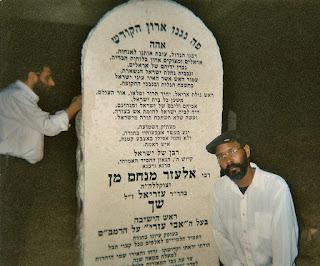 Many of my pieces tend to be reactions - hopefully thoughtful - to the opinions of others.

Every now and again a particular commenter or writer will say something that strikes at my core and I feel an urge to write on it. This has gotten me into trouble with people in the past, but I want to highlight a Facebook post by an individual named Barack Mandela and I very much hope he will not mind.

I find it exceedingly sad, although not particularly surprising, that a fellow Jew might feel this way.

This was my response:


Barack the Jewish nation is the most open and accessible nation of people on the planet. The key to inclusion, if you do not happen to have been born Jewish, is the religion. By joining the religion you become one of us, a Jew.

This is different from any other nation on the planet. For example, were I a Francophile and moved to France and learned the language and the customs, and so forth, I could still never actually be French.

But you are a Jew.

That makes you one of us.

It bothers me that he even feels it necessary to question how the rest of us think about a Black convert to the faith.

When I was a little boy my mother's mother would sometimes say to me, "Michaela, be proud to be a Jew."

At the time, I had not the slightest idea what she was talking about. I understood the word "proud" and I understood the word "Jew," but at the age of 12 I did not see any reason to be any more proud of being Jewish than I was proud of having brown hair and hazel eyes. I saw no more reason in Jewish pride than I saw in why my Junior High School friend, Wesley Chang, would have particular pride in Chinese ancestry or why Brent Donohue, from up the road, would have particular pride in Irish ancestry.

We were all just American kids and even as kids understood, and generally accepted, that we come in various sizes and shapes and ethnicities and genders. It was all just part of the general American mish-mash and it just seemed perfectly normal to me.

It is an impossibility.

But the Jewish faith is the entrance to the nation.

This is unusual among peoples and nations (and ethnicities and "races"}.

But I occasionally wonder why some people want to become Jewish.

To be a Jew with any sense of the history of the Jewish people is, in some measure, to keep an eye over one's shoulder. Jewish people represent a tiny .2 percent of the world population and yet we have been harassed and occupied and ethnically-cleansed and slaughtered throughout our history by much larger hostile populations who honestly believed that they have every moral right to kick our children in the face.

Some non-Jews, with a condescending smirk, might suggest that I am living in the past or that I am allowing the Shoah to serve as a neurotic shadow.

The truth is that the Jewish people throughout the world are still under constant pressure by much larger hostile powers that want to see the Land of Israel (i.e., the Land of the Jews) tamed and undermined and weakened and eventually eliminated. And even those non-Jews who many of us consider friends believe that Israel, the very land of our heritage, is actually a European colonial power that is forcing the allegedly "indigenous" Arab population under the boot of Jewish supremacism.

This is a lie, but there are hundreds of millions of people who believe it. These people have internationally powerful institutions on their side, such as the European Union, the United Nations, Britain's Labour Party, the Organization of Islamic Cooperation, and the Democratic Party.

So, my answer to Barack Mandela is, yes, you are one of us.

But there is a reason that we do not encourage conversion.