{This is the satirical bit that got me booted off of Daily Kos, lo these many years ago.} 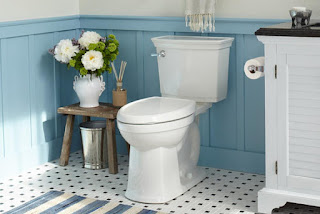 Sheikh Jarrah, East Jerusalem --- The entire world was shocked yesterday when this reporter revealed that retired electrician, Ehud David Netanyolmert, shook the peace process to its roots by building an illegal second bathroom in his East Jerusalem home.

“This is yet another example of Israeli intransigence,” said Palestinian Authority PM, Mahmoud Abbas. “We cannot negotiate with the Israelis if they insist upon violating international law with the continued building on Palestinian lands. Israel must pressure Mr. Netanyolmert to dismantle the illegal mini-settlement that he has constructed.”

Only slightly taken aback by the world community’s rejection of the second bathroom, Benjamin Netanyahu told the Jerusalem Post, “Israel wants peace and two states for two peoples. The Palestinians need to sit down at the negotiating table and I honestly do not see what some guy's second bathroom has to do with anything.”

In Washington, US President Barack Obama convened an emergency meeting with his cabinet in order to evaluate the situation and to determine the best response to this most recent Israeli aggression. In response to the crisis, US diplomat George Mitchell claimed, “Israelis have rights, but so do the Palestinian people. While the United States remains deeply committed to Israeli security, it is entirely unclear how the second bathroom promotes that security or in any way advances the cause of peace.”

When queried about this blatant Zionist violation of international law Mr. Netanyolmert objected to the entire line of inquiry. “You people are meshuganah,” Netanyolmert said while standing in his doorway, wearing his jammies and blinking into the morning sun. “Are you honestly telling me that Vladimir Putin objects to my second bathroom on the grounds that it is an impediment to peace?  Vladimir Putin?  Really?”

It should be obvious to any reasonable observer that Mr. Netanyolmert’s myopia regarding Zionist aggression, and his willingness to derail the peace process, cannot be allowed to go unchallenged. The Palestinian peace organization, Hamas, therefore responded today with a flurry of Qassam and Katyusha rocket attacks on S’derot and Ashkelon. The typical Israeli myopia extended to former S’derot mayor, Eli Moyal, who, while quivering under his desk, is alleged to have told his secretary, “Second bathroom? What second bathroom? What the hell are these people talking about?”

Meanwhile, a variety of Israeli left-of-center organizations are planning a mass rally in opposition to The Second Bathroom. Naomi Chazan, of the New Israel Fund, said that dozens of people will gather outside Mr. Netanyolmert’s home in solidarity with Palestinian activists in a No Second Bathroom rally. The protestors will carry signs reading, “Get the Hell out of the Bathroom!” and “Netanyolmert, Zionist Criminal Baby Killer!” and “Who Do These Jews Think They Are, Anyway?!”

Some fear that just as Ariel Sharon's stroll on the Temple Mount inevitably caused the Al-Aqsa Intifada, so Mr. Netanyolmert's violation of Palestinian sovereignty might spark a third... The First Second Bathroom Intifada.

One hopes that if the Israeli government makes the necessary concessions by evacuating the bathroom then the Palestinian Authority might be persuaded to sit down for peace talks.

But who could blame the PA if they refuse?
Posted by Mike L. at 8:31 AM

Email ThisBlogThis!Share to TwitterShare to FacebookShare to Pinterest
Labels: Satire