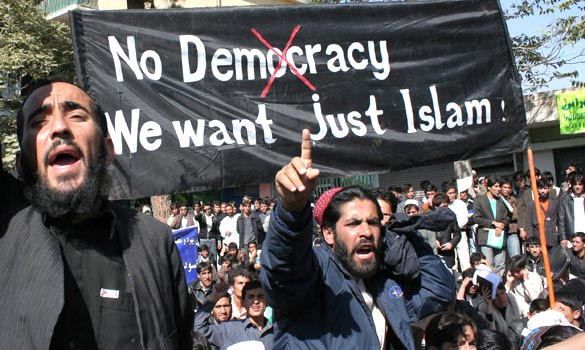 From the Gatestone Institute that oldschooltwentysix linked in the last post on the Harold Rhode article Existential Questions Facing the Muslim World, here's another just published piece about a couple of charming little outfits called Sharia4Belgium and Sharia4Holland and the increasingly sluggish law enforcement, judicial and political responses in these little countries to a radical challenge to their democracies. I guess they know the ropes.

What is it with little European countries and radical right wing bullies in the streets?

And something even more chilling. Islamic extremists, from the same group that proved that it is now acceptable (again) in Holland to storm a public meeting and demand that the liberal speakers be executed (in this case outspoken Muslim women), are setting up a parallel legal system in Belgium.

Way to go. Don't like the government? Fine. Ignore it. Set up your own court system. There are heaps of guys with "the knowledge" who will stick up their hands to be the judges and they already have the law so they don't need a legislature. Likely they already have their police as well; in one form or another.

We owe it to liberal Muslims everywhere and to brave reformers across the Arab world, and in Iran, where they risk imprisonment, torture and murder, to stand up to this.

In September, Sharia4Belgium established Belgium's first Islamic Sharia law court in Antwerp, the second-largest city in the country. Leaders of the group say the purpose of the court is to create a parallel Islamic legal system in Belgium to challenge the state's authority as the enforcer of the civil law protections guaranteed by the Belgian constitution.

The self-appointed Muslim judges running the Islamic Sharia court apply Islamic law, rather than the secular Belgian Family Law system, to resolve disputes involving questions of marriage and divorce, child custody and child support, as well as all inheritance-related matters.

Unlike Belgian civil law, Islamic Sharia law does not guarantee equal rights for men and women; critics of the Sharia court say it will undermine the rights of Muslim women in marriage and education. Sharia4Belgium says the court in Antwerp will eventually expand its remit and handle criminal cases as well.

Cross posted Geoffff Joint, Bar and Grill
Posted by geoffff at 7:47 AM