Of Genetic Egyptians and Cultural Palestinians

Continuing on the theme of the inherent racism of anti-Zionism, when the Progressive-Left anti-Zionists are not busy with the particulars of the “settlements,” the “apartheid wall” and the rest, or with the role of the “Jewish lobby” (be afraid, be very afraid, muhahahaha!) puppet-mastering American policies (OMG! ZOMG! ZOG!), they find leisure to talk about deeper stuff like the rights the Jews don’t have to Palestine, and the clemency the “Palestinians” ought to magnanimously show them as part of a goodwill gesture (after the Jews have given up just about everything, of course).

One of the claims I always get a kick out of on Progressive-Left sites, even on image-conscious ones like Daily Kos, is their discussion of genetics and the claim to the land. We already know they think Zionism is a White Colonial thing, but what they think of the local Arabs (whom you can’t call that—it’s either “Palestinians” or repeated troll-rate and ban) is no less interesting. They are “the lineal genetic successors of the Canaanites,” no less, and sometimes one of the anti-Zionists chimes in with the sage observation that “some of them are actually descended from Jews.” That changes everything then, huh?

I have already laid out the genetics-agnostic Jewish national definition. Not that the Jewish people has nothing to offer even in that department: The DNA evidence for the singular ancestry of the kohanim, Jewish priests, descendants of Aaron, is well-known, and also serves as one of the refutations of the Khazar Hypothesis. But there's an angle on this from outside the Jewish point of view, looking at it universally.

First of all, the obsession with genetics on sites that call themselves Progressive is ironic. The claim that DNA should determine rights to the land is not only ironic, but carries dark echoes. Simply put, there is another website where the obsession with genetics and the contention that DNA should dictate policy is de rigueur; the name of that site begins with a “Storm” and ends in a “front.” The observation that politics is a circle where Far Left and Far Right end up being the same is relevant here.

But what of the claim that DNA matters so strongly? Does it have merit? Is the possession of genes alone a sufficient link to some heritage? Looking at the present-day Egyptian people, the answer is instructive. 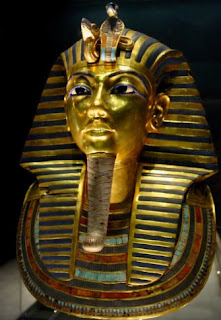 The original Egyptians of Pharaonic times never went away. None of the successive invaders of Egypt implemented a policy of ethnic displacement; even the Arab influx of the 7th century, strong enough to effect a linguistic change on the Egyptians, had the settlers absorbed in the population. Genetically speaking, therefore, the modern Egyptians are the heirs of the Pharaonic ones.

Does that genetic inheritance form a real link with the past? It doesn’t look like it at all. The modern Egyptians are linguistically, religiously and culturally Arab; they have no sentiments toward the rich heritage they have on their soil, and with the recent intensification of Islamic fervor the artifacts of the Pharaonic times are more and more imperiled. (I was going to write that those artifacts in British museums were the only safe ones, but that is no longer true for the United Kingdom either.)

The only visible link to the past remaining in Egypt is the Coptic language, the liturgical language used by the Copts in their Christian worship. It is a descendant of the ancient Egyptian language. Given that the Copts are in a situation little better than the Jews were in the 1930s—surrounded by enemies, unarmed, and confronted with a world that is interested in keeping the peace with those very enemies for the sake of a smooth flow of oil—it looks as if this last surviving link is no safer than the Pharaonic artifacts. Were the Pyramids to disappear, it would take an Indiana Jones going to the depths of forbidden realms to tell that a non-Arab, non-Islamic culture once held sway in that land.

The modern-day Egyptian is Egyptian by the happenstance of being born in Egypt. Culturally an Arab, and now increasingly seeing himself as part of the Muslim worldwide collective first, his genetic relation to the ancients has no significance. The conclusion is that genetics alone has little to contribute to national definition.

So, when we get to the local Arab colonists within the Land of Israel a.k.a. Palestine, what does genetics give us? The Progressive-Left myth of a unified brown-skinned “Palestinian people” is just that: a myth. Because the Land of Israel is situated at the passage between Asia and Africa, it has known countless invasions and population displacements. Hence, the genetic diversity of the local Arabs, with nearly all colors of skin, hair and eyes found. Genetics has even less of a chance of being significant than for the Egyptians.

The Arabs in Palestine had not thought of Palestine as a separate entity until Greater Syria was split between Britain and France in 1920, giving Palestine as the southern part. The only nation that had ever according Palestine special status before that is the Jewish nation. Even if we could somehow accept a lineal descent from the Canaanites and lost Jews, the fact is the Arabs residing in Palestine are culturally Arab, at most Levantine. The language on their shop signs is Arabic like everywhere else in the Arab world; their music is Arab music; the costumes they parade in “Palestine Heritage Festivals” are not particular to Palestine, but Levantine in general, meaning they’re found in Lebanon, Syria and the south of Turkey as well. Their claim to be “indigenous Palestinians” has no objective basis to rely upon. But, it serves an anti-Jewish purpose so well, so it’ll do.

What about the Jews? What is it that not only ties the Jews to the Land of Israel, but makes them the one and only true Palestinian nation?

Culture. Real, visible culture. An objective linkage for all to see, and for denialists to deny by using far-fetched fictions.

The Hebrew language: The only language nearby that doesn’t come from the Arabian Peninsula.

The Hebrew calendar: The only one that reflects the effects of the seasons on this land of all lands. Succot, Pesach and Shavuot: Harvest, ripening, planting. In the farthest ends of the earth, Jews have celebrated according to the seasons of the Land of Israel.

And there are more. Those are real things, unlike the irrelevant fact of genetics, whose only effect in the real world is on the bodies of the individuals; much less the total fictions used to artificially connect the local Arab settlers to this land, the land they had never accorded significance to until recent times, the land they would rather see nuked than continue to be held by the Jews. Shades of King Solomon’s sentence, anyone?

Let the arguments from DNA be left to the Progressive-Left anti-Zionists and their neo-Nazi counterparts; the Jewish claim to the land is the strongest, the only tenable one, flowing from the real, objective, visible cultural connection the Jewish people—and only the Jewish people—has to the Land of Israel of all lands. The case for the rightness of Zionism is ironclad, and by dint of logic, so is the fact of the inherent injustice of anti-Zionism, the struggle to prevent the one and only true Palestinian nation from exercising their right of self-determination on their own land.