I'd vote yes she did.


Incitement by MK Haneen Zoabi (Joint List) is to blame for the death of 13-year-old Hallel Yaffa Ariel, MKs on the Right posited Thursday.

“The blood of the 13-year-old girl murdered today is on Zoabi’s hands,” MK Nava Boker (Likud), a Deputy Knesset Speaker, said. “This is the result of the incitement she speaks from the Knesset’s stage.”On Wednesday, Zoabi called IDF soldiers “murderers” during a speech in the Knesset, leading to a near-brawl in the plenum when several MKs from the coalition and opposition shouted at her and tried to rush the stage. Following the melee, Prime Minister Benjamin Netanyahu asked Attorney-General Avihai Mandelblit to look into legal ways of removing Zoabi from the Knesset.

Boker said Zoabi “encourages terrorist attacks against Jews and the murder of children in their beds.

Words have consequences. Zoabi is less interested in peace than in incitement and anger and revenge. She is worthless and dangerous.  She is on the side of Jew killers. 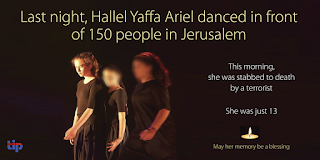