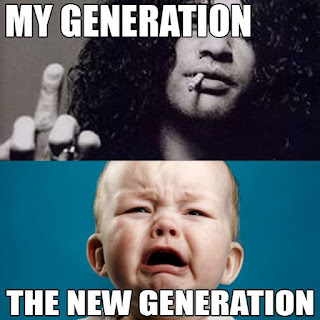 I continue to be deeply disappointed in the contemporary western-left.

It's the hypocrisy. The self-righteous indignation. The anti-white racism. The antisemitic anti-Zionism. The treating of "people of color" like they're small children. The growing opposition to freedom of speech.

The Left has lost itself.

There was a time when the Left stood for freedom. When I was a kid it was always the conservative right-wing that represented ideological rigidity. The Right was stodgy and humorless and racist and dull and restrictive... or so it seemed to many of us at the time.

It was the Right that gave us Richard Nixon, after all.

But now everything has switched!

Now it is the Left that tends to be that way with their "trigger warnings" and thumb sucking "safe spaces." Their gender neutral pronouns. Their deplatforming of speakers. Their loathing of alternative viewpoints and their disinclination to debate or discuss beyond narrow strictures of acceptability.

They're like a bunch of old biddies patrolling the words that we may use or even the hairstyles that we may sport.

The American Left has become some sort-of twenty-first-century version of Tom Sawyers' Aunt Polly, making sure that you've washed behind your ears.

I've read where the generation following the "millennials" are more open-minded than their older brothers and sisters. I certainly hope so because the current moment reminds me of nothing so much as the Red Scare of the 1950s.

We are going through a "moral panic" in the United States in which people are searching for Nazis and Klansmen and White Supremacists under their bed or lurking in the closet.

It is obnoxious, politically self-serving and intrusive into the lives of others.

Much of the Left should take a permanent retreat to the Safe Space of their choosing.

That way, at least, they will be less likely to annoy the rest of us.