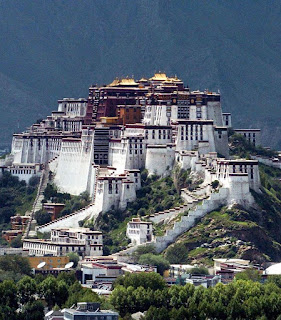 One of the particularly galling aspects of Linda Sarsour is her talent for ingratiating herself and the cause of Palestinianism with every domestic social justice cause in the United States. Whether the cause is Driving While Black or the aspirations of the dreamers, that is those who grew up in the U.S. as illegal immigrants, Sarsour turns her sophistry to drawing parallels between those causes and the Palestinians' situation. The result is that activists for those causes, whether or not you like any of them they have widespread support, who fail to recognize her sophistry see Palestinianism as a natural extension to their other social justice causes.

However, there is an international social justice cause, popular albeit dormant on the left, that has genuine parallels with the southwest Levant. That would be Tibet. Specifically, China's occupation of Tibet and transfer of Han population into the province parallels the Arabs' conquest of Palestine back in the 7th-8th centuries and subsequent migration of Arab populations into the southwest Levant. Furthermore, today's Palestinians parallel, if current trends continue, the descendants of today's Han settlers of Tibet.

Following the Palestinianist logic, if the Han squat long enough in Tibet, they will become the native people there. By that point, if the Tibetans were to somehow reclaim any of their ancestral land, they would be thieves of Han Chinese land. If you were to ask any social justice warrior whether Tibet belongs to the Chinese, it would be like claiming that the earth is flat. Following up with a question of how long the Chinese would have to squat to become rightful owners would be similarly received. Yet these same social justice warriors argue that the results of the Arabs' conquest of the Levant in the 7th and 8th centuries and settlement since then give the Palestinians title to the southwest Levant, many of them unaware of the prior history.

However, people will not automatically draw a connection between the Palestinians' claims based on the Arabs' 13 centuries old conquest and the situation in Tibet. This connection will require an alliance between us as the advocates for Tibet, like the execrable Linda Sarsour made with advocates for racial and gender equality. To do this, identifiable members of the pro-Israel community will need to take up the cause of Tibetan freedom. In turn, the Tibetans could take up the cause of countering the Palestinianist narrative either in reciprocation as the blacks have reciprocated to Sarsour and her ilk or to shore up support in the American Jewish and Evangelical communities.
Posted by Sar Shalom at 1:41 PM

Email ThisBlogThis!Share to TwitterShare to FacebookShare to Pinterest
Labels: intersection