{Also published at the Elder of Ziyon, Jews Down Under, The Jewish Press, and Writer Beat.} 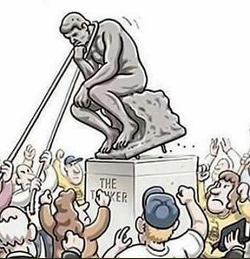 I have yet to speak out against Donald Trump.

One reason for this is that I do not so easily leap aboard thoughtless Bandwagons of Hatred.

If the anti-Trumpeteers had not done such a terrific job of projecting their toxic racialized bullshit - and thereby throwing the United States into the worst spasms of violent malice that anyone has seen since 1968 - I might feel differently.

But they did and I don't.

More than anything else it is the ideologically-blinkered hypocrisy that is reprehensible.

They despise Trump as a sexist and, yet, do not mind in the least that Bill Clinton committed actual rape in the White House. If any university president did what Bill Clinton did Linda Sarour-following western feminists would climb trees with trombones in order to express their politically self-serving, self-righteous disgust.

They call Trump a "racist" for preferring legal immigration, yet this is normal on its face.

Anyone coming into the United States should do so - as my father did in the arms of my grandmother, Sarah - through regular, legal, channels.

Yet this very notion drives some people into paroxysms of rage.

Also, needless to say, as a matter of common sense and basic human decency, we should endeavor to keep Jihadis out of the United States.

{If this is inconvenient to our Muslim friends, I sincerely apologize.}

Therefore when I observe all of these screaming violent and masked, black-clad idiots in the streets in Berkeley, I shrug my shoulders because I know that they are not reacting so much to Trump administration policy as to what hard-right former Presidential contender and media critic, Patrick Buchanan, is thought to have dubbed "culture war" in his 1992 speech to the Republican National Convention.

And the reason that the progressive-left and their fascistic Antifa allies despise Donald Trump is because, on a cultural level, he curbed transforming the United States into the kind of street turf that feminist anti-feminist and antisemitic anti-Zionist Linda Sarsour would love to dance upon.

Among all the reasons that Donald Trump defeated Hillary Clinton Hatin' on Whitey is the most prominent to my mind. The white working-class knows when it is being urinated upon which is why they did not vote for Clinton in the hoped for numbers and why some of the more razor-headed are putting on that old twentieth-century racist regalia.

In response, the Social Justice Warriors and Safe Space Seeking Chickenshits began a high pitched squealing early last November that has not lowered its volume or pitch from that day to this. The fascistic anti-fascist Idiots in Black are beating up innocent people in the streets of Berkeley as their progressive-left soul-mates tear down historical statuary all around the country.

It is a disgrace and it is just the kind of thing that will wreck the Democrats in 2020.

However, in terms of Jewish / Israel issues the embassy is second only to that of negotiations.


Writing in the Times of Israel, Raoul Wootliff tells us:

Senior members of the Trump administration and Israeli officials renewed talks over the possibility of moving the US embassy from Tel Aviv to Jerusalem, a promise repeatedly made by the president in the 2016 election campaign, during high-level meetings in Israel last week, the Times of Israel has learned.

If the conflict is ever going to end it can only happen after the United States, followed by the EU, acknowledges Jerusalem as Israel's capital and move their embassies to that location. So long as the Arabs see that even the United States refuses to relocate its embassy to Jerusalem then they understand that the Jewish State remains vulnerable because its international support is flaccid.

Therefore they will continue to use Jerusalem, and particularly the Temple Mount, as a wedge.

If they can drive Jewish sovereignty off the Temple Mount then they can continue to dream of re-establishing Muslim dominance on the ancestral Jewish homeland. And this is precisely what keeps the hope of "anti-Zionism" alive.

And that is why it is absolutely imperative that Trump move the damn embassy to Jerusalem.

Such an action, more than anything else at this moment, can snap the status quo and place breaks upon the long-term Palestinian-Arab resistance to the Movement for Jewish freedom. And this is why I am cautiously pleased to see the issue in discussion.

Breathing life into the Oslo process - if that is what this means - is a vital mistake.

Have we learned nothing since Bill Clinton stood on the White House lawn with Yitzhak Rabin and that heinous old bastard, Yassir Arafat?

In twenty-five years the "peace process" has brought little but blood and toxic levels of hatred from the duplicitous Europeans. The "peace process" has nothing whatsoever to do with bringing about a harmonious conclusion of hostilities with a Palestinian-Arab state thriving in peace alongside Israel.

On the contrary, it has everything to do with demoralizing Israelis and encouraging violence against them, as well as against Jews around the world.

Everybody and his brother is more than happy to piss on Donald Trump, but if he fails to move the embassy and if he forces yet another phony "peace process" down Israel's throat then I will speak out against Trump in Jewish political circles.

For me, however, it will not be the progressive-left Bandwagon of Trump Hatred that we have seen ever since Hillary Clinton took notice of some evil, right-wing version of Kermit the Frog.

That particular brand of semi-hallucinatory political hatred I will leave to others.
Posted by Mike L. at 9:19 PM