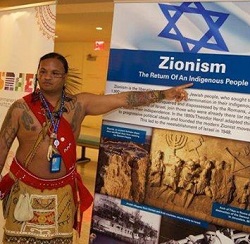 Dani Ishai Behan is the founding administrator of the "Progressive Zionism" Facebook page.

Behan describes himself as a "Half-Irish/half-Jewish American activist, musician, and writer."

I think of him as an administrative pain-in-the-ass and a dedicated fighter for justice for the Jewish people. Mainly, however, he is known for drilling down into the heart of western-left antisemitic anti-Zionism and discussing his ideas on social media for years, now, before a significant audience.

Behan's most recent piece is a response to an article by Marc Lamont Hill published in the Huffington Post on May 17, 2018, entitled, "7 Myths About The Palestinian-Israeli Conflict."

Behan's response in the Times of Israel is entitled, Marc Lamont Hill’s ‘7 Myths’ Are Not Myths at All.

Hill, to my horror and disgust, is the "Steve Charles Professor of Media, Cities, and Solutions at Temple University."

Behan addresses seven ideas around the Long Arab War against the Jews of the Middle East that Professor Hill claims are false.


1. These people have been fighting forever.


The truth is that Arabs and Jews have not been fighting forever. Rather, it can be dated to the end of the 19th century or, more acutely, the beginning of the post-World War I British Mandatory period.


Land theft, colonization, dhimmitude, heritage theft, massacres (beginning with the slaughter of Jews at Khaybar, in case anyone is wondering where the Palestinian “Khaybar” chant comes from), expulsions, confiscation/destruction of Jewish cultural sites – the list of injustices committed by Arabs against Jews is very long, and that’s only accounting for the pre-20th century stuff.

2. This is a religious conflict.


Simply put, this is not about religion. It’s about land theft, expulsion and ethnic cleansing by foreign settlers to indigenous land.


Why else would Hamas’ charter include Islamic hadiths in it? Why else would they regularly invoke the Gharqad tree hadith explicitly commanding Muslims to kill Jews? Why else would the PA exclaim that Jews have “no right to desecrate our holy sites with their filthy feet” in response to Jews visiting the Temple Mount?...

I didn’t know indigenous peoples (Jews, in this case) could become “foreign settlers” in their own land by being exiled for centuries.

And I didn’t know colonizers (Arabs, in this case) could become indigenous by stealing land and replacing indigenous sacred sites with mosques.


Too often, however, the claim that “it’s complicated” functions as an excuse to sidestep a very simple reality: this is about the 70-year struggle of a people who have been expelled, murdered, robbed, imprisoned and occupied.


And now you’re saying that it was only 70 years?


This argument wrongly presumes that any deal that includes the sharing of stolen land with the victims of said theft could be fair. But even in relative and pragmatic terms, this is not true. Think back to the wildly disproportionate U.N. partition agreement of 1947 that allotted 55 percent of the land to the Jewish population even though there only comprised 33 percent of the population and owned 7 percent of the land.


Only half of the land was given back to the Jews, and most of it was indefensible, inarable desert. The only reason we weren’t offered even LESS than that is because the UN anticipated further mass aliyot in the aftermath of WWII. The Arabs got the better deal by far, but they rejected it because they could not stomach the idea of living with Jews as neighbors and as equals, rather than as second class citizens.


This argument plays on Orientalist narratives of Arabs as innately violent, irrational, pre-modern and undeserving of Western democracy or diplomacy. The argument also castigates Palestinians for resisting their brutal occupation and repression. Occupied people have a legal and moral right to defend themselves.


If your idea of “peace” entails either a wholesale genocide/expulsion of Jews or restoration of the post-conquest/pre-Zionist status quo of Jewish subordination (and yes, this is what most Palestinians want), then it’s absolutely fair (and certainly not a myth) to claim that you do not want peace, but rather continued conflict until the other side is “defeated”.


This claim is a product of U.S. and Israeli hasbara, a term for propaganda. First, this argument is only rhetorically deployed in relation to Israel, as opposed to Palestine or virtually any other nation-states.


No, this claim is common sense.


Anti-Semitism is a very real phenomenon around the globe. And we must be vigilant about addressing and destroying anti-Semitism wherever it emerges. Too often, however, this claim is leveled against anyone who critiquesor protests the practices of the Israeli nation-state.

Under these conditions, allegations of anti-Semitism become nothing more than a reflexive retort, intended to shut down the conversation. More importantly, this is a key part of Zionist strategy: equating Judaism with Zionism and the Israeli state itself.


Marc, listen very carefully to what I’m about to say. Are you ready? Good.

1. You are NOT Jewish. You do not get to decide what is and is not antisemitic. Period. End of story.

2. Where do you get off lecturing us about our culture, especially when you can’t even get the definition of “hasbarah” right? Get back in your lane, fella.

3. You complain of “Orientalism”, only to invoke Orientalist tropes about Jews (i.e. that we are irrational, conspirational, and innately predisposed to lying and trickery for personal/political gain) mere moments later. Good show.

4. Antisemitism is any belief or action, intentional or otherwise, that serves to threaten our national, racial, religious, or political equality. It does not mean “critique of Judaism”, you ignoramus.

6. No one, not even the most unhinged right wingers in our community, believes that “criticism of Israel” is a priori antisemitic. Literally NO ONE says that. These Jews who believe that all criticism of Israel is antisemitic are strawman inventions that exist only in the fevered imaginations of antisemites.

The key to Dani's view - and to my eye it is clear - is the concept of Jewish indigeneity to the "Land of Israel" which is simply another way of saying the Land of the Jewish People.