With apologies to Eric B. & Rakim.

Hezbollah's master plan destroys our cities, and sets up scenes like this. 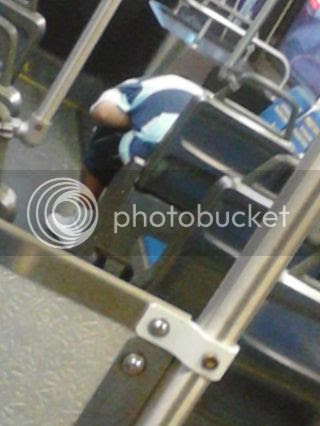 This is not The Headless Bus Rider.  It's just some dude who should probably be in a rehab somewhere.

Tell-tale sign of a heroin addict.  I feel bad for the bus driver, who has to wake him up at the end of the line, and let him know where he is.

They wake up with a bit of a start when the bus turns or stops suddenly, but then nod right back off into their doper dip again.

Amazingly enough, they never fall down to the ground, though I can't imagine how they manage to maintain balance considering the precariousness of their perching at times...

Welcome to Kensington.  It gets a little depressing here sometimes.

Concerns about Hezbollah’s crimes are growing throughout the international community. In April of this year, the United States Treasury Department took action against Hezbollah for working as a drug cartel. The department also blacklisted two Lebanese financial institutions, accusing them of transferring tens of millions of dollars to the terror group.

As American officials revealed last Tuesday, one of the banks agreed to pay the United States $102 million to settle a lawsuit involving Hezbollah's money laundering scheme.

In 2001, international intelligence sources identified Lebanese residents operating for Hezbollah in South America’s tri-border area (Argentina, Paraguay and Brazil). The area has become a major source of funding for Hezbollah’s terror activities. In October 2008, investigators took down a cocaine smuggling operation in Colombia, noting that “profits from the sales of drugs went to finance Hezbollah.”

In 2011, the U.S. government seized drug profits linked to Ayman Joumaa, a drug trafficker and money launderer, linked to Hezbollah. His network was earning as much as $200 million per month. More recently, in June of this year, four Lebanese men were sanctioned for effectively acting as “ambassadors” for Hezbollah in West Africa.

We need to understand that Hezbollah is a progressive social movement, though,  because some 'progressive' tool tells us this.

(How about we dump their junkies off on her stoop?)
Posted by JayinPhiladelphia at 11:55 PM