“Dragons may not have much real use for all their wealth, but they know it to an ounce as a rule, especially after long possession; and Smaug was no exception.”

They have always longed for Palestine. They have always regarded the Dome of the Rock in utmost sanctity, falling only below that of Mecca and Medina. They have striven to protect what is dear to their hearts just anyone would have done so in the face of being dispossessed and desecrated. Or so we have been told for years, and continue to be told day after day.

The reality is different. Neither Palestine as a distinct land nor the gilded mosque atop the Temple Mount in Jerusalem had been special until relatively recent political expediency made them so. A color photograph taken in the 1950s, when the kingdom of Transjordan had full custody of the Temple Mount and made sure no Jew could “desecrate” the mosque by his presence, shows the state of the building so sacred to the Muslims: 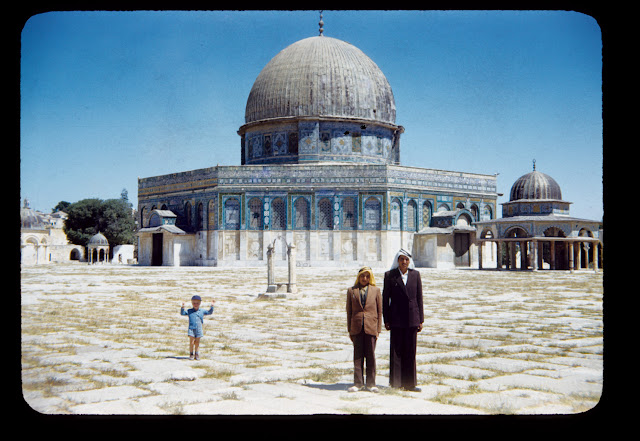 Photo of the Dome of the Rock taken in the 1950s. Click to enlarge. (Hat tip to Elder of Ziyon)

With the dome not yet gilded, and some of its tiling chipped by neglect, and the floor nearby overgrown with weeds, this does not speak much of the sanctity and precious value attached to the Dome of the Rock.

Only twice in history did the Muslim world attach special importance to Jerusalem: During the Crusades, and following the Six-Day War in 1967. At the time of the Crusades there was a genre of Islamic poetry called “Praises of Jerusalem”; in the early 14th century, the scholar Ibn Taymiyyah lashed out against that genre of poetry, castigating it as bordering on idolatry—clearly, Al Quds was now safe enough that Muslims could go back to forgetting about it.

Speaking of “Al Quds”: If the name, related to Hebrew qodesh “holiness,” seems to imply a high value accorded to the city by Islam, keep in mind that the first Arabic coins from after the Islamic conquest in the 7th and 8th centuries have the name “Iliya” on the name for Jerusalem. Aelia Capitolina, the name given to the city by Hadrian after the Bar Kochba Revolt. The name of the land too was taken by the Arabs as neither Israel nor Judea, but Falastin, from Hadrian’s Palaestina. And it was but a sub-province until 1920.

“Thieves! Fire! Murder! Such a thing had not happened since first he came to the Mountain! His rage passes description – the sort of rage that is only seen when rich folk that have more than they can enjoy suddenly lose something that they have long had but have never before used or wanted.”

There was no separate “Palestine” in Arab or Islamic consciousness before 1920; it was nothing but the southern sub-division of the province of Al Sham, or “Greater Syria.” Following World War One, King Faisal wanted to be the ruler of Arab Greater Syria, not just of its southern part of Palestine plus Transjordan (torn from British Mandate Palestine in 1922) or the nothern part of modern-day Syria and Lebanon; the original Nakba, or Catastrophe, was when Britain and France implemented the Sykes-Picot Agreement by splitting Greater Syria among themselves, driving Faisal out in the process. Only then did Palestine become a cause for the Arab and Muslim world in its own right.

And yet even now, Falastin is no more special a case than Al Andalus (former Islamic-ruled Spain). Its inflated value today lies in being a propaganda bonanza: Where Arab and Islamic imperialists can disguise their ambition to steal the land and nation-state from the Jews as “resistance of an oppressed stateless nation,” and their Far Leftist allies can recast their inexcusable support of Arab/Islamic imperialist aggression against an indigenous people—the Jews, the only true indigenous Palestinians—as support for “the struggle against Western colonialism.” This is why you hear about Palestine so much today.

The lies are relentless, but the truth must be told nonetheless, as far as we can: That the Arab nation or Islamic global community is like Smaug the dragon in Tolkien’s The Hobbit, a rich miser sitting uselessly on a pile of gold (huge masses of land), according value to it only once it is under threat. This rich man, possessor of many vineyards and countless flocks of sheep, has had his eye on the single vineyard and one sheep of the Jewish nation. Faced with a world that rightly frowns upon such greed and injustice, he has thought up a plan: That his son Falastin shall be dressed in poor man’s clothing, then spread the news to world of how the Jew has made constant attempts to steal Falastin’s single vineyard and one sheep, to a sympathizing world that will now take Falastin’s story to heart and revile the Jew for being such a thief and oppressor.

But the truth remains the truth, that Falastin is nothing but the rich Arab landowner’s son, and that behind this conflict there is nothing but the unjust desire of the rich man to appropriate the little that the Jew has to himself. The Jews alone have accorded value to Palestine in particular and to Jerusalem throughout all ages; they alone have a real, objective connection to them through their unique, unbroken cultural ties, preserved in centuries from afar. Zionism is justice for a nation on its own land; anti-Zionism is injustice, greed, theft, robbery, vandalism, denialism and oppression all aimed at that nation, perpetrated by those who are in no shortage. The historical facts speak for themselves.