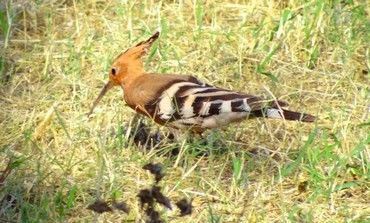 Are there any more silly people than the BDS'ers?  I think not. We have all seen their epic fails lately and is it any wonder when we see the kind of nutbars they really are? Case in point:

Anti-Israel activists sharply criticized the socialist British daily the Morning Star for referring to Israel’s national bird the hoopoe in its daily quiz.

In a letter to the newspaper, Linda Claire, the chairwoman of Manchester’s Palestine Solidarity Campaign, asked why it had referred to the bird after it has “always been the newspaper you could rely on to support the cause of the Palestinians.”

“Maybe you don’t support the methods chosen by the international solidarity movement of BDS [boycott, divestment and sanctions against Israel] to assist the Palestinians in their struggle for freedom and justice,” she said, adding that this included any reference to Israel’s wildlife.

“Despite its condemnation of zionists [sic] it yet finds space to include an item in its daily quiz about Israel’s national bird. Is the Star not aware there’s a cultural boycott going on?” Claire’s husband, George Abendstern, asked in another letter.

Birdbrains, indeed.Here's a special little bird just for them.