An old friend emails : I will be interested when your political blog has focus on gender politics. Now that would be interesting reading!

The term "gender politics" could straddle a wide range of human inter-relations but I know what she means and she is quite right. An enormously important issue needs focus from blogs like this. Two issues really. The treatment of women, (and gays of course -- but that is another subject), across much of the increasingly extremist Muslim world but especially in those lands where one or another strand of Islamic totalitarian imperialism has got a stranglehold. And the rust-flaky tin ear that the West , especially the left and most especially the feminist left, has for the horrible plight of Muslim women.

Indeed the hypocrisy can reach a level where the word is not enough to describe the bizarre double think contempt for reason and common morality that the left routinely finds itself spouting. A new word is needed. In a moment some examples but first we must steel ourselves to look at this and to admit what we see before us without the cant.

Be warned. This video is unpleasant.

This is a shorter YouTube version of the same interview:

All this does is put a human face to what everybody already knows. Rape is a political weapon routinely deployed against women who dare to assert independence in Iran and other Muslim totalitarian states. Rape victims can be executed for adultery. A virgin who finds herself convicted of a capital crime will be raped before she is hanged, beheaded or stoned to death. Polygamy is routine. Girls marry who they are told to marry often while still children. Women in the streets are harassed and humiliated by thugs who deem their dress indecent for the pettiest reasons and who may have the power of the state to carry out random "chastity inspections". Women taking an active role in the world can be impossible. Birth rates are the highest in the world condemning women to a grueling empty life of painful drudgery and poverty that men believe is their lot. Illiteracy rates for women are far higher than the already high rates for men. Getting an education is often discouraged and can be fatal.

Honour killings are rife for women or young girls who do anything from being seen in company with a man without a chaperone to refusing an arranged marriage.It is estimated that 2/3 of killings in the Palestinian territories are this type of murder.

To say that women are second class citizens is to inflate the concept of citizenship. Women are not citizens of any class in these lands. From the cradle to the grave they are chattels.

Now one would think that this appalling state of affairs would attract some interest in the luvvie left/liberal classes in the West. A passing nod at least while spewing on you know who for instance. Not a bit of it of course. On the contrary those on the left, including what London based Australian blogger Daphne Anson succinctly describes as women of a certain age, are among the most vocal supporters of these nasty ugly man riddled misanthropic cultures and regimes.

Female Israel-Bashers Unite, You Have Nothing To Lose But Your Hypocrisy (video) 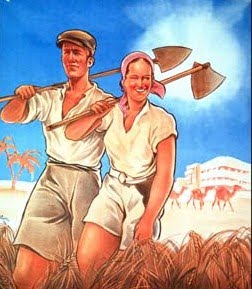 Once upon a time, at a Zionist conference in Melbourne, Australia attended by a lot of university students, I heard a young man (bless him!) during the break remark to one of the madrichim present that hasbara should make much more of the fact that women's status in Israel compares so favourably to that of women in nearby countries.

To my disgust, the slightly older man merely shrugged and walked away. But there's no doubt the student was right.

I've been spring-cleaning, and in my desk drawer I found a cutting from the London Daily Telegraph that someone had sent me, dated 9 September 2002. The small News-in-Brief item bears the eye-catching heading "Man Beheads His Daughter".

'An Iranian cut off his seven-year-ol daughter's head after suspecting she had been raped by her uncle, the Jomhuri-ye Eslami newspaper said yesterday, But a post-mortem examination showed she was a virgin.

"The motive behind the killing was to defend my honour, fame, and dignity," the father said.' Reuters, Teheran.

I can sense the leftwing feminist yawns right now, as the wimmin for Palestine concentrate their ire and fire on the one nation in the Middle East that protects women's rights.

In a region of the globe and among cultures that so often treat girls and women as trash, Israel, as Bibi Netanyahu so eloquently pointed out last year (see my sidebar) "Israel is different".

The following video encapsulates that difference in a nutshell. It shows the types of horror that too often confronts the female sex elsewhere in the Middle East, reminds us of the vile treatment that certain of Israel's Muslim enemies advocate for Jewish women, and demonstrates how rights for Israeli women, irrespective of background, are enshrined in Israeli law.

Here is Daphne in another post on "the willingness of the western women, in particular, to act as presenters on [Press TV] that is funded by a regime which stones women to death and colludes in the gang-rape of virgin female prisoners prior to execution is especially repulsive and odious...

So, therefore, is the willingness of anti-Israel female activists such as Baroness (Jenny) Tonge to give interviews to Press TV.

And so, of course, is the willingness of so many common-or-garden female Israel-bashers to act as apologists for the Iranian regime.

Among those regular viewers, evidently, is the all-female coven that constitutes my local Palestine Solidarity Campaign branch. A trio of these middle-aged/elderly women (whose antics range from harassing shoppers outside supermarkets stocking Israeli produce to initiating an online petition asking David Cameron to apologise for the Balfour Declaration) ..."

When it comes to Israel and the sheer blooded minded extremist Muslim racism of which it is the principal target, the feminist left, just like much of the rest of the Western left, are not even conflicted. It's to hell with the women. They don't even rate a thought.