The Netzarin Junction blood libel --- Who is this murdered child? 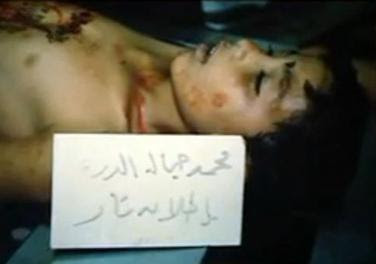 This is the dead child at the morgue of the Al - Shifa Hospital in Gaza City on 30 September 2000 that was passed off as the corpse of Muhammed al-Durah by the blood libel conspiracy.

Of course it is sorely tempting to think this too is fake. Sadly this appears unlikely. There are other pathology photos and they have been seen by journalists and others who confirm they show injuries consistent with the pathology report. The pathologist reported abdominal injuries with the intestines expelled.

We can be certain it is not Muhammed al-Durah.

This child has been murdered likely with a knife. I suppose such events are not uncommon in Gaza. Maybe they just had to wait?

Some conspiracies are real and ugly and they don't get much uglier than this. It involved a lot of people, was carefully planned and the execution was sophisticated. This is the work of an experienced and professional group. The strategists behind this knew exactly what they were doing. They knew what note would resonate across the world and bounce around Europe and the Middle East in particular for years.
Posted by geoffff at 9:57 AM