Conquest of the Deplorable Cheese Doodle 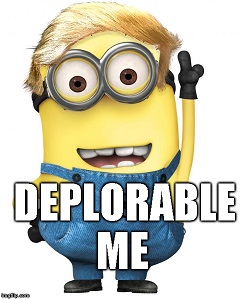 As I write these lines, anti-Trumpers are protesting and, in some cases, rioting, throughout America's largest cities. In Chicago two young black men beat the holy hell out of a 50-year old white guy because he allegedly voted for Trump.

Meanwhile, the Democratic Party is in big trouble and many of us are still quietly processing the gravity of the current political moment.

Much to my astonishment, the day after I went onto the Nothing Left radio show to discuss the meaning of Hillary's likely win, Donald Trump handed the Democratic Party a big can of whoop-ass.

My suspicion is that the Brexit Effect befuddled the pollsters, the majority of whom indicated the strong likelihood of a Clinton win.

It is probable that many Trump voters, like many Brexit voters, were intimidated into believing that their political sensibilities represent the very worst of human failings and therefore they misled pollsters concerning their positions. These would have been among the very large numbers of people who represented Trump's soft base.

In the months leading into the election Trump-leaning voters were told - over and over again - that they are racist, sexist, homophobic, bigots. The victory of Hitler-cum-Trump, therefore, is said to reveal an American political-social consciousness rolling in the muck of barbarism, stupidity, and the unjust prejudices of earlier times.

Many throughout Britain felt much the same way concerning Brexit voters. EU supporters, much like Hillary supporters, believed that the opposition was (or is) comprised of backward-looking, low-life Neanderthals who - when they aren't feeding the pigs or banging their heads against rust-belt walls - are out spreading hatred and racism toward people "of color" in order to gratuitously satisfy irrational anachronistic prejudices.

Therefore, because the "deplorables" were constantly told how deplorable they are, they sometimes lied about their true electoral intentions and thereby skewed the polls. In other words, both Trump and Brexit had the kind of quiet support that tends to hamstring pollsters, or so goes the theory.

Broken Glass in the Streets

Some of the angry are out in the streets breaking windows in American cities, today, because they believe that the United States is a horribly racist country and the conquest of The Deplorable Cheese Doodle (or is he a Cheetoh?) represents a confirmation of their worst fears.

They revel in the alleged ugliness of their fellow Americans because they have been encouraged to do so by much of the media, much of academia, and by politicians looking to divide the electorate for personal political gain.

Thus we end up with this surreal political moment wherein people are in the streets spitting hatred at haters for the purpose of ending hatred in America. It is apparently through breaking store-front windows and the bones of middle-aged white guys that Love Trumps Hate.

The Democratic Party assumption of anger or racial malevolence as a primary motivating factor for Trump voters points to a serious problem in the ways that we have come to see ourselves as a people and a country.

While the United States is a flawed democracy, it is nothing like the fascistic hell-hole that some make it out to be. From a human rights perspective, in fact, the US is one of the most decent countries on the entire planet and that is not going to change anytime soon, Trump or no Trump.

Furthermore, while the man can obviously be boorish, there is little to indicate racism in his policy propositions around issues of immigration.

Trump wants immigration into the United States to take place through a legal and tightly-controlled process which, during a period of rising Jihad, emphasizes security measures. Given the spread of Political Islam throughout the Middle East and Europe, and the unfortunate European experience with mass Muslim immigration, this is merely commonsense. It has nothing whatsoever to do with "race" hatred and everything to do with people who are eager to blow up the infidel in the name of Allah. It is not about skin color or ethnicity. It is about the spread of a theofascistic ideology that holds women in contempt and that encourages the throwing of Gay people off of tall buildings as an expression of religious justice.

It is one of the great ironies of recent western political history that the movement most associated with social justice and universal human rights, i.e., the progressive-left, is also the political movement least likely to stand up for the minority rights of hundreds of millions of people living under al-Sharia throughout the Muslim world.

America does not hate - and neither does the West, in general - but the world is not lacking for countries that do.
Posted by Mike L. at 9:01 PM