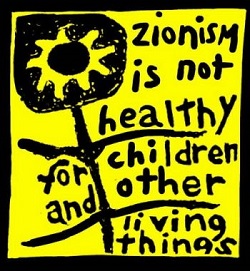 The poster on the left represents a bit of anti-Zionist propaganda that has been around for decades and is among the negative images of Jewish self-determination that today's college kids grew up with.

Although the hard-left generally supports anti-Zionism, American Jews still cling to the Democratic Party despite the fact that so much of the party and the movement believes it has every right to tell Jewish people where we may, or may not, be allowed to live within our own homeland.

Given the fact that the western progressive-left has made a home of itself for malicious anti-Semitic anti-Zionists it becomes rather difficult to understand why American Jews continue to support a political movement, and its adjacent political party, that hold them in contempt.

The Washington Post has a piece from last September entitled, In the safe spaces on campus, no Jews allowed by Anthony Berteaux. Berteaux relates the story of Arielle Mokhtarzadeh, an Iranian-Jew who was made to feel unwelcome by the UCLA progressive community due to her caring for the Jewish people through caring for the Jewish State of Israel. As a student of Jewish-Persian background she therefore attended the annual Students of Color Conference in search of answers.


Over the course of what was probably no longer than an hour, my history was denied, the murder of my people was justified, and a movement whose sole purpose is the destruction of the Jewish homeland was glorified. Statements were made justifying the ruthless murder of innocent Israeli civilians, blatantly denying Jewish indigeneity in the land, and denying the Holocaust in which six million Jews were murdered,” she said. “Why anyone in their right mind would accept these slanders as truths baffles me. But they did. These statements, and others, were met with endless snaps and cheers. I was taken aback.

The truth is that many Democrats despise the lone, sole Jewish state as a human rights monstrosity even though it has a far better record on human rights than any other country throughout the Middle East. This little fact, in itself, reveals the anti-Jewish racism within BDS and, therefore, embedded within the Democratic Party.

It is for this reason that progressives often support Hamas and the Palestinian Authority when they call for the murder of Jews in the streets of Jerusalem, Tel Aviv, and Haifa. Every time Students for Justice in Palestine (SJP) or the General Union of Palestine Students (GUPS) meet on some campus to call for yet another intifada they are, in fact, calling for the murder of innocent Jews in Israel.

Such calls for anti-Jewish violence tend to be supported not only by other progressive-left students, but also by sympathetic university administrators who could hardly care less that students are calling for violence against Jews on their very own campuses. They even provide thumb-sucking "safe-spaces" where those very same students can rest their heads on university provided pillows without having to deal with the richly deserved ramifications of their own behavior. Since no one is allowed to even question their judgment in these "safe spaces" they need not even consider the possibility that calling for violence against Jewish people - as a matter of social justice, no less - might actually be something other than liberal.

In fact, San Francisco State University president, Leslie Wong, is so enamored of anti-Semitic anti-Zionism that he even praised GUPS as representing "the very purpose of this great university."  He did so despite the fact that, in their cries for intifada, they literally call for the murder of Jews in Israel. Sometimes they even call for bringing the intifada home, by which they mean support for the political murder of Jews in the United States. None of this fazes the progressive-left because offing Jews - particularly of the Israeli variety - is considered a rational and perfectly normal human response to alleged Jewish aggression against the bunny-like "indigenous" population in the Land of Israel.

And this is why Arielle Mokhtarzadeh was treated like filth at UCLA.


The ramifications of ignoring the normalization of anti-Semitism cannot be understated: The most recent FBI hate crime report found that 58.2 percent of hate crimes motivated by religious bias were targeted at Jews. Jews make up 2.2 percent of the American population, so the FBI’s statistics make it clear that Jews are the most disproportionately attacked religious group in America. It should be troubling to everyone that an SJP member at Temple University physically assaulted a pro-Israel Jewish student two years ago, calling him a “Zionist baby killer.” But it should be far more troubling that the SJP chapter at Temple (like all SJP chapters) promotes itself as a progressive organization, claiming solidarity with movements such as Black Lives Matter.

The Democratic Party just got its ass kicked by a crude businessman-entertainer who they accuse of being everything short of the Devil and now they are not only screaming from the rafters about racism and white supremacy, but they even have the chutzpah to suddenly start whining about the alleged anti-Semitism of conservatives and Republicans.

The truth is that the Left and the Democratic Party are enemies of the Jewish people to the extent that they make a homes of themselves for anti-Semitic anti-Zionism. American Jews are, essentially, being told that they may contribute to the progressive movement but the price of admission is sitting across the Democratic Party table from anti-Zionists who have no respect for our history, no respect for the Holocaust, and who think that we are undeserving of self-determination and self-defense within our own homeland.

The progressive-left and the Democratic Party fling around charges of racism like they're confetti. Throughout the recent American presidential campaign they lambasted Trump and his supporters as Neanderthal fascists representing the very worst of all humanity, which is why some of their devotees are beating the hell out of white people in the streets. But if the Democratic Party has suddenly rediscovered anti-Semitism it is strictly out of political convenience, nothing more.
Posted by Mike L. at 7:30 AM