THE TRUMP ADMINISTRATION IS EVIL

There are several things that I despise about the Trump Administration.
The first is all this peace in the Middle East nonsense. It is much better to go back to encouraging hostility between Jews and Muslims because, as a dick-like personal acquaintance of mine once told me, the Jews are not "humane" to the innocent, bunny-like Palestinian-Arabs.
Thus the only thing to do is, yet again, fund the Palestinian Authority and the PLO so that they can finance the "Martyrs Fund" wherein they literally pay random Arabs to kill Jews in the streets of Israel.
After all, as Barack Obama understood, the only path to peace is through Jewish blood. Until the Israeli Jews recognize that Judea is Arab land and they have no right to build villages for themselves on the land of their heritage, then the Democratic Party, the European Union, and the United Nations have no choice but to finance "pay-for-slay" wherein the West pays Arabs to kill Jews.
But it is clearly for our own good.
I believe that it was Hitler who told the Jews, "Sit your ass down and shut the fuck up or it may go bad for you." Greater words of wisdom were never spoken.
And in that vein of peace, it is also necessary to give gazillions of US tax dollars to the Ayatollahs in Iran who call for not only the genocide of the Jewish people but for death to America. It is, therefore, necessary to help the Holy Men of Iran build a Nuclear Weapon of Peace for the purpose of stabilizing that part of the world through a nuclear arms race.
What Biden and Obama understand, and the insidious racist and sexist Republicans do not, is that the only way forward is for the Sunni Arab states, like Egypt and Saudi Arabia, to have nukes of their own in their never-ending struggle against the Shia Muslims of Iran.
This nuclear arms race will represent a soothing Balm of Peace and Goodness to the Levantine mind.
But enough of those insidious Jews and the desire of the Democrats to help them through hatred.
Maybe sometime in the next few days, I will discuss American political culture and how it is important to manufacture fear and loathing toward those disgustingly white fascist Americans of European descent and their "Zionist" allies.
What Joe Biden and Alexandria Ocasio-Cortez and the Democratic Party understand, but that you may not, is that Martin Luther King, Jr, got it all upside-down and backward. The thing is not NOT to judge people according to skin color but to make sure that people follow the example of BLM/Antifa by encouraging violent racism in the name of peace-loving anti-racism.
It is, therefore, necessary for "progressives" and youthful Democrats to cover their faces in the streets for the purposes of political violence against synagogues and cops and anyone wearing a red baseball cap.
But that is for a later discussion. 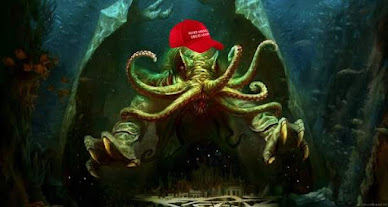