Approach of the Zombie Apocalypse

I didn't vote in 2016. By that point, I had long been disenchanted with the Democratic Party mainly because I realized that they were betraying their own alleged values, particularly around issues of race. But I could not see myself voting for Donald Trump, either, so I didn't.

The Democrats, however, are not very friendly toward the Jewish state and, thus, toward the Jewish people. They honestly tend to believe that Israel is a racist, imperialist, militaristic, apartheid, colonialist, very bad, racist state. They even believe, following Barack Obama, that they get to tell Jewish people where we may, or may not, be allowed to live on the very land of Jewish heritage.
{Ho. Ho. Ho. I do not think so.}
In any case, I did not vote in 2016 because the media kept telling us that it was in the bag for Hillary. Besides, I live in California and most of my friends here would rather gnaw their right arm out of its socket and beat themselves silly with it rather than vote for a Republican. I even went on Nothing Left radio out of Melbourne with Michael Burd and Alan Freedman the day before to discuss what a Hillary presidency would look like in terms of Israel.
So, that day I hardly even bothered with the election news because there seemed no point. When Laurie showed up later that evening I asked her about the results and she said something like, "What? You haven't been watching? Turn on the news, you're in for a surprise."
I flipped on the channels and, sure enough, newscasters were crying on station after station. Women were wailing in the streets and young men were beating up anyone wearing a red baseball cap.
Three feelings came over me, one falling upon the other. The first was shock! I had thought, along with everyone else aside from Ann Coulter, that the TV entertainment host and New York billionaire real-estate guy was toast.
The second emotion was one of hilarity. I just couldn't believe it! How could almost everyone have gotten it so wrong? Then I just started laughing as Laurie, who is no one's idea of a Republican, stared at me with her hands on her hips. She was not the least bit pleased with the electoral outcome.
But then The Fear struck.
I was filled with foreboding. I was afraid for the country. I was not, however, afraid of Donald Trump. I was afraid at how my friends here in the San Francisco Bay Area might react and many of them did not disappoint. The hatred toward our new President was absolutely palpable! I never saw such political hatred. Even Richard Nixon, despite the Vietnam War, did not receive this much raw public malice.
As the weeks progressed I kept expecting the hatred to ease, but it didn't. Months of hatred turned into years of hatred. Friends broke up and families divided, even as the economy thrived and black unemployment reached an all-time low.
And, now, here we are again and the hatred has done nothing but increase as the progressive-left BLM/Antifa thugs - with the tacit support of the Democratic Party and the progressive-left -- terrorize the streets of Portland and Seattle and Minneapolis and Chicago and New York... defacing synagogues and attacking cops.
I like to kid Laurie that if Trump wins tonight we should head into downtown Oakland to enjoy the spectacle.
I will go dressed like this. 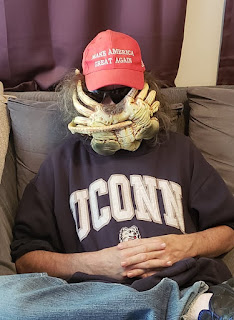