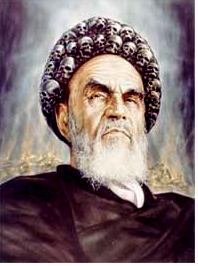 I ask God Almighty for the victory of the Muslims over the infidels.
Khomeini 7 August 1979
...
Israel, the enemy of mankind, the enemy of humanity, which is creating disturbances every day and is attacking our brothers in south Lebanon, must realise that its masters are no longer accepted in the world and must retreat. They must give up their ambitious designs on Iran, their hands must be severed from all the Islamic countries and their agents in these countries must step down. Quds Day is the day for announcing such things, for announcing such things to the satans who want to push the Islamic nations aside and bring the superpowers into the arena. Quds Day is the day to dash their hopes and warn them that those days are gone
Khomeini  16 August 1979

On Quds Day, the nations should caution those governments which are traitors. Quds Day is the day when we shall discover which individuals and which regimes approve of the conspiracies of international groups and oppose Islam. Those who do not participate they oppose Islam and are in agreement with Israel, and those who participate they are committed, and in agreement with Islam  opposing the enemies of Islam at the head    America and Israel. It is a day when truth will be distinguished from falsehood, the day when truth and falsehood will be distinct.
Khomeini  6 August 1980 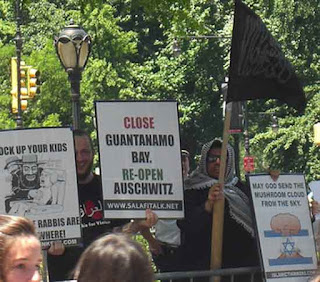 ...
How much longer must your Quds be trampled under the boots of the usurping Israelis, these worthless people whom America has put there (to see to their interests)?
Khomeini  1 August 1981

Al Quds Day Toronto  2012
...
May God help us succeed in one day going to Quds and praying there. I hope that the Muslims will consider Quds Day an important day and that in all the Islamic countries on Quds Day, the last Friday of the holy month (of Ramadan), they will stage demonstrations, hold meetings, have gatherings and attend the mosques where they will shout out. When a population of one billion shouts out, Israel cannot do anything, it will be afraid of their shouts alone. If all the Muslims who are in the world today, and there are about one billion of them, come out of their homes on Quds Day and shout ‘Death to America, Death to Israel and Death to Russia,’ the very words will bring about the demise of these countries.
Khomeini  1 August 1981

Al Quds  Sydney 2012
...
In order to liberate Quds, machine-guns relying on faith and the power of Islam must be used, and political games redolent of compromise and keeping the superpowers happy laid aside.
The Muslim nations, particularly the Palestinian and Lebanese nations, must punish those who waste time with political manoeuvres and not tolerate political games which end in nothing but loss and disadvantage for the oppressed nations. How long will these myths about the East and West continue to fascinate the powerful Muslims and the hollow propaganda they trumpet over their loudspeakers frighten them?
Khomeini  1 August 1981
...
The nation, government, parliament, army and other armed forces of Iran, which today stand in unified rank demonstrating Islamic unity and divine order, are determined to stand against any satanic power and violator of human rights, to defend the oppressed and support beloved Lebanon and Quds until Quds and Palestine are returned to the Muslim fold. The Muslims of the world should view Quds Day not only as a day for all the Muslims of the world, but one for all the deprived, and from that sensitive point, they should stand against the oppressors and the world-plunderers and should not rest until the oppressed have been set free from the oppression of the power-wielders.
Khomeini  1 August 1981

...
It is the duty of the nations, with the arrival of Quds Day and the anniversary of the martyrdom of that great man in the history of mankind (Imam `Ali [pbuh]), in their gatherings and marches to earnestly demand that their governments rise up against America and Israel using their military might and their oil weapon. And if they (the governments) pay no heed to this demand and instead support the criminal Israel which threatens the whole region, even the noble cities, and the depth of whose aspirations are now apparent, they must force them into action through pressure, strikes and threats. In a situation when Islam and its holy sites are under threat of aggression, no Muslim can remain indifferent. what the governments of the region are doing at this time, when Israel is encroaching extensively on Muslim lands and is killing innocent, defenceless Muslims, is nothing other than uttering empty, conciliatory words. And more disastrous than this is that they turn to America, the criminal kingpin, for protection against Israel, in effect like turning to a dragon out of fear of a snake, and even though they have the means with which to fight them, they are not prepared even to utter a hostile word against them or threaten them. In such a situation, everyone should prepare himself for obliteration and throughout his life consent to any form of humiliation.
Khomeini   16 July 1982 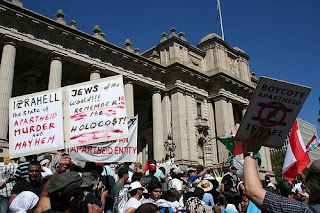 Of course Khomenei’s (sic) speech needed to be taken in the context of 1979, and I knew the organisers of this rally well enough to know that they are not anti-Semitic people by any stretch of the imagination, and were solely concerned to see justice done for Palestine. Even so, it still wasn’t clear to me whether or not Al Quds day was itself essentially anti-Israel, and I knew that I couldn’t speak of my concern for the suffering of my Palestinian sisters and brothers if that compromised my love for my Jewish sisters and brothers.