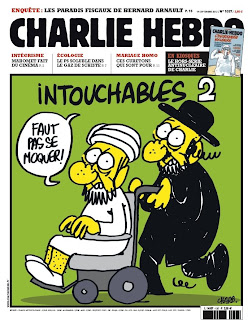 That's not what they are calling it, but they could and heck maybe we should start such a movement. Fearless French satirical magazine Charlie Hebdo, already the victim of one Muslim attack, has published "blasphemous" cartoons of the Prophet causing the French Gov't to shut down some 20 schools and embassies in Islamic countries in anticipation of Muslim outrage. Now that's what I call freedom in action. So far there has been no midnight knock on the door for any of the magazine's staff. Good for France.

You know maybe this is the cure for the thing. All Western nations shut down their embassies etc until Muslims get over their rage over every little "insult," while magazines and individuals flood the media and internet with toons and movies and everything else they want to. Get it out of their systems...Occupy Mohammed! Time to bring Muslims into the real world already experienced by Jews and Christians everyday in modern society where all is questioned, probed, insulted etc. including religious beliefs and sacred cows.